In the early hours of this morning, a large number of users reported on Weibo that the Samsung mobile phone system crashing. The crashes range from black screens to garbage characters of even infinite restarts. A bulk of the report claims that this issue is active on the Samsung Galaxy S8, S9, and S10. However, there are still a few reports from some older models. 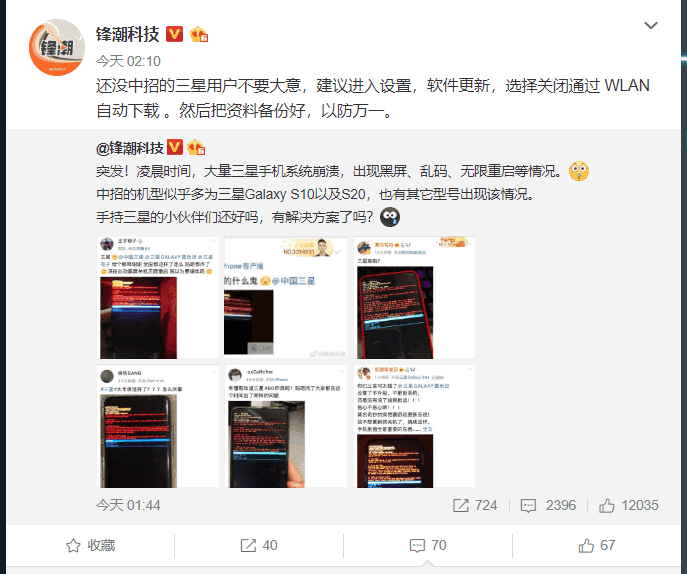 Looking at the images on Weibo, the situation is basically the same. It appears to be a problem with the server. From initial investigations, there were reasons to believe that the April update has a loophole that led to bugs in the old version of the lock screen app. However, many Samsung smartphones are safe and work normally. The entire note series seem to work perfectly.

According to some professionals, this could be affecting phones that got an update. If your device is ok, they recommend that you turn off automatic updates in the settings as soon as possible. You also have to back up all your data just in case.

A few hours after the report flooded the internet, Samsung has now released an official comment. The company said that it has received feedback from some users about system problems. According to the company, it is investigating the cause and corresponding solutions will be available as soon as possible.

“Dear Samsung mobile phone users, we have received feedback from some users on system issues. At present, we are actively investigating the reasons and providing corresponding solutions as soon as possible”.

Some bloggers believe that the crash is associated with the lock screen app as well as the Chinese calendar in April.This year is the first day of the fourth lunar month in April. If the Calendar App is not updated in time, it may cause the system to calculate the time incorrectly, causing system bugs and crashes.

After restarting, double-click the power button to enter the photo interface. Then pull down the notification bar, click the setting button, search for the time, and change the date to before 21. Then wait for the official repair.

Next CloudTech laments as the U.S. adds it and 32 other Chinese companies to the entity list