Oppo pretty much finished its plans for the Find series this year, and now, it’s time to resume its work on the Reno series. According to recent reports, the company is preparing the Oppo Reno 4 and Oppo Reno 4 Pro 5G for a launch soon. Today, a new leak surfaced in the web giving us a good idea of what the Chinese firm has in tow for the Reno series. Moreover, there is a couple of renders giving us the best look in the upcoming devices.

According to the new leak, the Reno 4 Pro will ship with the Qualcomm Snapdragon 765G SoC. It will be available in two flavors with 8GB of RAM and 128GB of storage or 12GB of RAM and 256GB of Internal Storage. The specifications will be built around a 6.55-inch display with curved edges, it may be of the AMOLED kind. The handset will feature a 48MP camera with OIS, 12MP dedicated shooter for low-light videos, and a 13MP telephoto lens. On the front, we probably have another of Oppo’s punch-hole cameras with 32MP. The Pro variant draws power from a 4,000mAh battery with 65W fast charging. 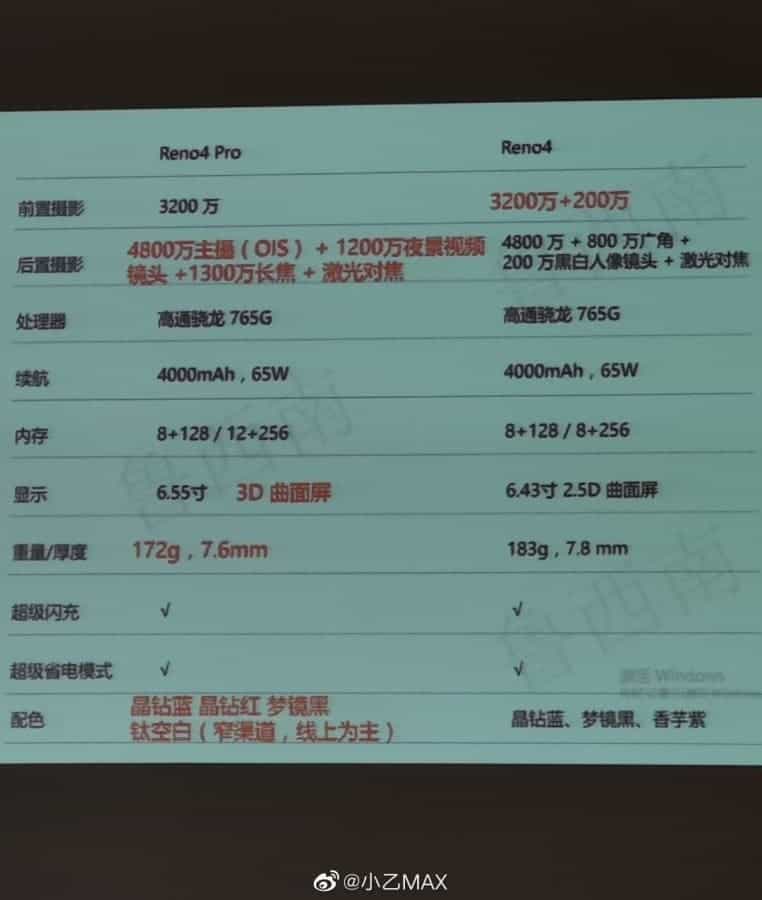 Apparently, the Reno 4 feature similar specifications, but lacks OIS in the main cam and there is an 8MP ultra-wide shooter to replace the video unit. Moreover, the telephoto lens is gone. Instead it’ll have a 2MP depth sensor. The handset flaunts a smaller 6.43-inch display without the curves of the Pro version. Moreover, this one will feature a dual-punch-hole setup on the front – a 32MP shooter coupled by another 2MP depth helper. The handset has 8GB of RAM and 128GB of Internal Storage. Apparently, the “Pro” in the upper variant stands for advanced camera features.

The renders above give us the best look into the unreleased Oppo Reno 4 Pro. As aforementioned the Pro variant has a single punch-hole snapper, waterfall display, and a triple camera island on the back. Interestingly enough, the 3.5mm headphone jack is intact sitting aside from the USB-C port. The renders also confirm our belief of an in-display fingerprint scanner, since the biometric sensor is nowhere to be seen.