International Data Corporation (IDC) recently released a quarterly tracking report for tablet PCs. China’s tablet PC market shipped about 3.73 million units in the first quarter of 2020. Affected by the “New coronavirus” epidemic, it has got a year-on-year decrease of 29.8%. Shipment of Slate Tablet (traditional straight tablet) is about 1.67 million units, down 63.3% year-on-year; shipment of Detachable Tablet (pluggable keyboard and tablet) is about 2.06 million units.

Affected by the epidemic, shipments of the tablet’s commercial / consumer market all declined significantly in the first quarter. In the commercial market, the government concentrated its efforts to combat the epidemic, the suspension of classes at all levels of schools, and the suspension of production and production of enterprises. As a result, it has delayed or canceled many projects related to the tablet PCs. The commercial market performed lower than expected, with shipments of only 620,000 units, a year-on-year decrease of 47.8%. In the consumer market, driven by the demand for online education, the performance was better than expected. But the production capacity restricted the supply, with shipments of about 3.1 million units, a year-on-year decrease of 24.6%.

Overview of the top five manufacturers in the Chinese tablet PC market in the first quarter of 2020: 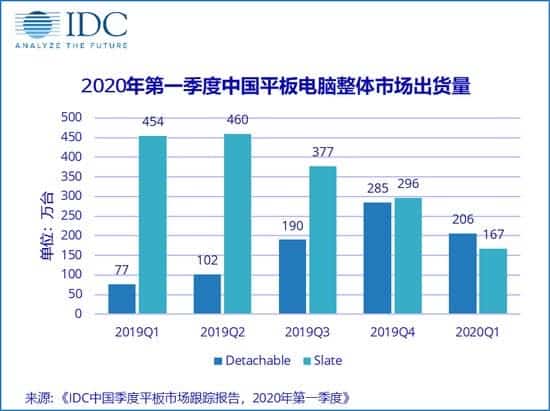 Huawei: Ranked first. In the first quarter, Huawei’s tablet shipments were about 1.5 million units, a year-on-year increase of 4.3%, and market share accounted for 40.2%. During the epidemic, factory shutdowns result in fewer shipments. Only Huawei bucked the trend, and foundries resumed production and resumed production. 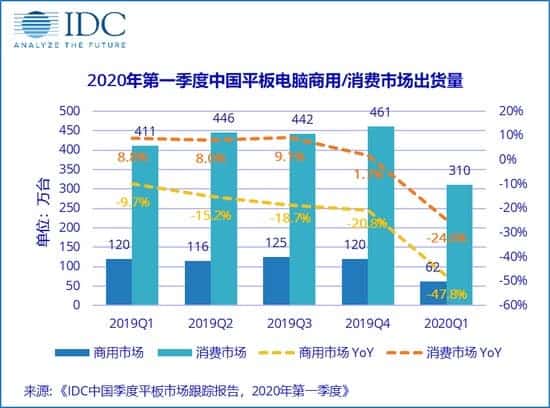 Apple: Supply chain affected shipments. In the first quarter, Apple’s iPad shipments were approximately 1.31 million units, a year-on-year decline of 42.5% and a market share of 35.1%. Due to the slow progress of resuming production at Apple’s foundry and insufficient supply of subsequent spare parts, shipments could not meet market demand. The release of the new iPad Pro did not help the overall shipment due to product positioning and price factors. In the future, in the face of fierce market competition, it is still necessary to launch more competitive entry-level products.

Microsoft: Shipments remain stable. In the first quarter, Microsoft’s flat panel product shipments were about 120,000 units, down 17.6% year-on-year, and the market share accounted for 3.2%. Although shipments declined significantly year-on-year, Microsoft’s month-on-month decline was only 1.5%, and shipments were relatively stable. Shipment of the new Surface Pro 7 continues to increase, and the Surface X series begins to ship.

Lenovo: It was greatly affected by the epidemic. In the first quarter, Lenovo’s tablet shipments were approximately 60,000 units, a year-on-year decrease of 49.5%, and the market share accounted for 1.7%, down by 1.6 percentage points. Because the main foundry is located in the Wuhan area, Lenovo’s shipments are more affected by the epidemic. However, with the help of online courses and enhanced cooperation with online channels, Lenovo has significantly improved the consumer market. 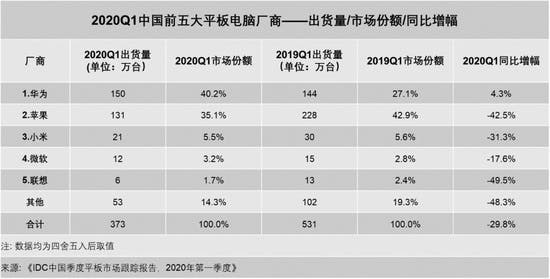