At the Redmi 10X series conference held yesterday, the Redmi Smart TV X series appeared on the same stage. It is offering three sizes of 50 inches, 55 inches, and 65 inches. And as the spokesperson said, it is focusing on young customers. This also means that it should be priced affordably.

In fact, the Redmi Smart TV X competes with the newly announced Honor Smart Screen X1. We can even say their competition has been moved from the smartphone market to the large-screen products markets. The Redmi TV not only offers the same three sizes as its rival, but the price is said to be the same. Among them, the 65-inch price is 3299 yuan ($460). But during the first sale, it will cost only 2999 yuan ($418). Lu Weibing also remarked that the prices of the X55 and X50 versions will be the same as those of the Honor Smart Screen X1.

Last night, the Honor Smart Screen X1 55-inch version’s price was confirmed. At JingDong, it is currently sold for 1699 yuan ($237). Honestly, its price is higher. And customers can get their hands on it for this pricing after a number of discounts and purchase offers. But how much does the Redmi Smart TV X 55-inch version costs?

Not to be outdone, this morning, Lu Weibing also announced the price of the Redmi Smart TV X55, and it turned out to be the same: 1699 yuan. Xiaomi has decided to make the same 600 yuan ($84) discount. As a reminder, the original price is 2299 yuan ($321). And the company also announced this model will go on sale on June 10. 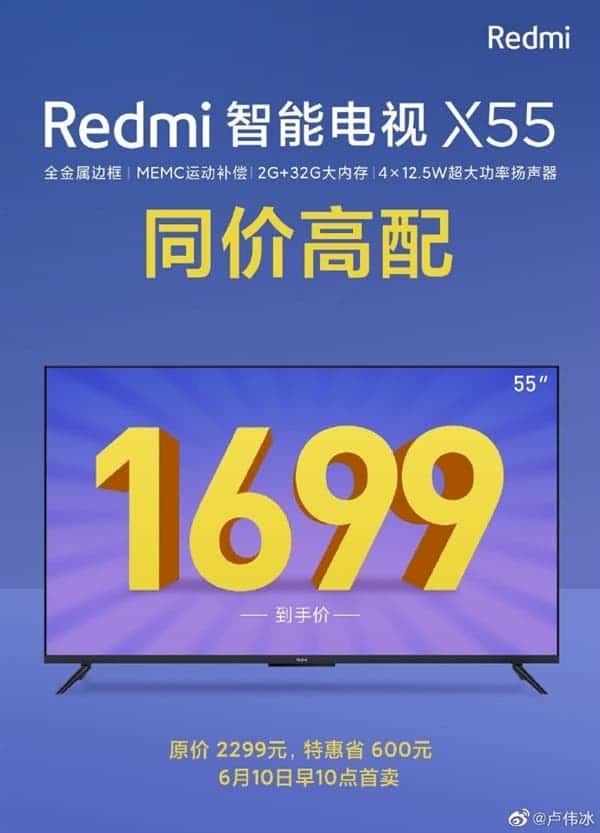 Lu Weibing emphasized: the Redmi Smart TV X55 has a higher-end metal frame design, a better sound system (4×12.5W speakers with Dolby sound effects), a larger storage memory of 32GB, and also has a 4K screen + MEMC motion compensation + far-field voice support + AIoT intelligent control. So in his eyes, the Redmi model has a number of advantages over the Honor model. When comparing, it’s difficult to disagree with this statement.