Currently, several mobile phone manufacturers have one or more foldable phones on their shelves. Each of these devices comes with some sort of unique design. For example, the Samsung Galaxy Fold can be expanded into a large tablet. The Galaxy Z Flip and Motorola RAZR use clamshell designs while Huawei and Royole Flexpai uses form factor design. Looking at Huawei Mate Xs and Royole Flexpai 2, when the phone is folded, the flexible screen is outside. A recent patent filing shows a ZTE foldable phone with a distinctive design.

The design patent was submitted by ZTE in mid-2019. On May 29, 2020, the State Intellectual Property Office officially issued the patent. The patent data shows that the mobile phone is different from the previous folding phone from ZTE. It has a horizontal folding line and its screen is on the outside of the phone after folding.

When the phone is unfolded, the screen surface will appear very large, similar to devices such as Samsung Galaxy Z Flip. The Motorola RAZR also uses this design.

The screen edge is very thin and the receiver is on the top edge of the screen. Although this device has a camera, it cannot be seen around the screen. The new phone can also wrap the display through the bottom. After folding the phone, the whole body will look very compact. The thickness of the top and bottom of the phone is exactly the same after folding. 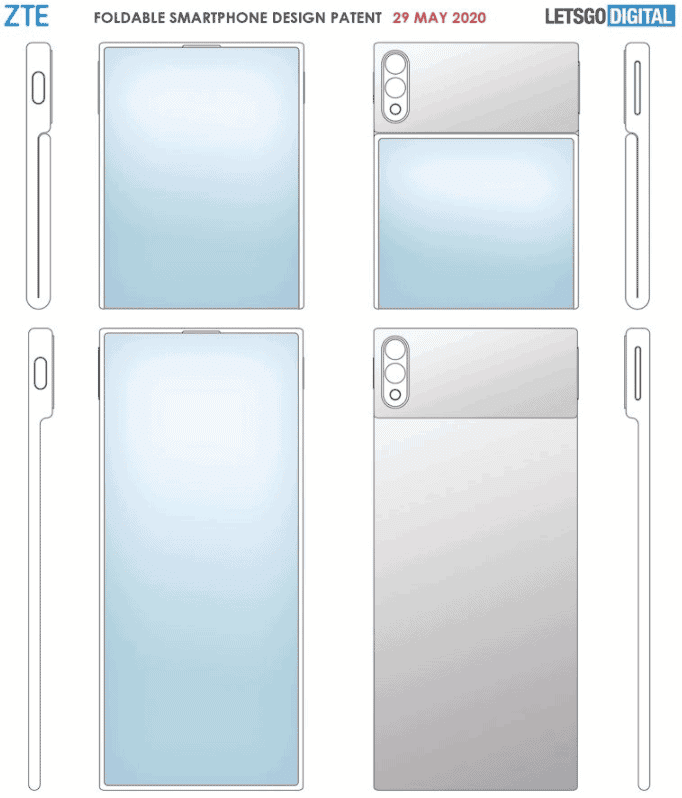 The front and back of this device can be used as the screen surface. On the front, the display will appear larger. However, on the back, it can accommodate dual cameras with flash. The camera of the device in the upper left corner of the fuselage. The display of this device folds backward thus there is no need to build a separate selfie camera. This obviously saves the overall cost of the phone.

There is a physical button on the left and right sides of the phone. Obviously, these will be the power and volume control buttons. Because the display folds backward through the bottom of the case, the USB-C interface has been moved to the top. This design makes it convenient, otherwise, the phone will not be able to charge after folding.

Obviously, at first glance, this is a stylish mobile phone. By placing the screen on the outside, there is no need to install a separate selfie camera. The ZTE foldable phone has only two cameras, which indicates that it is a relatively cheap foldable phone. However, let’s not forget that the durability of the flexible screen is still a problem. This is because the flexible screen is easier to scratch when it is outside.

Next An analyst predicts Snapdragon chips on Huawei P50 and Mate 50 phones, seriously?