HTC’s affairs in the smartphone market can be described as “very disappointing”. But the Taiwanese company does not plan to leave the smartphone business and everyone is already used to the fact that HTC does not earn money from mobile devices, but only loses. What the future holds for HTC is a big question. But in the short term, HTC Desire 20 Pro is expected to be released.

A piece of information about this model was found in the Google Play Console database. In particular, it is said that it will be equipped with a 2.0 GHz Snapdragon 665 chipset and an Adreno 640 GPU. The screen of the HTC Desire 20 Pro will be with a resolution of 2340 × 1080 pixels and its diagonal can vary between 6.4 – 6.5 inches. In the upper left corner, there is a round hole for a selfie camera. 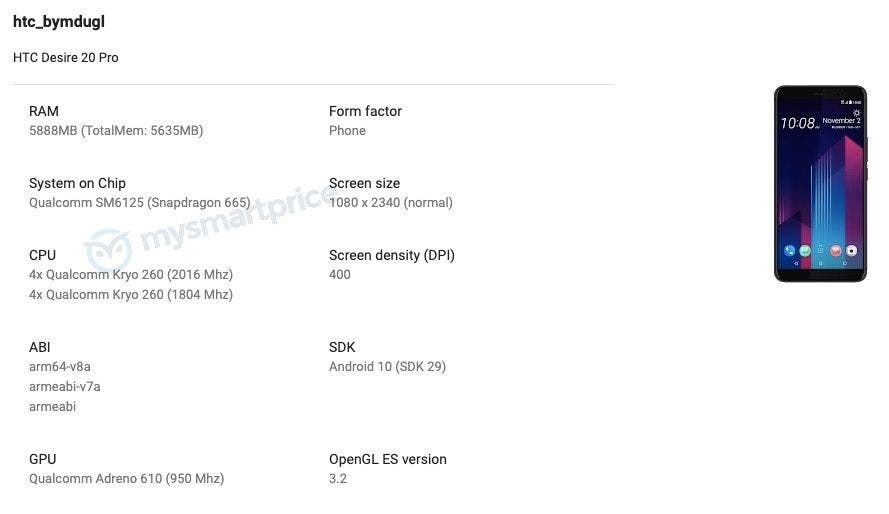 HTC Desire 20 Pro should receive 6 GB of RAM and run Android 10 operating system. The main camera will have four sensors, but their characteristics are unknown. We can only assume that without a time-of-flight camera (ToF), things will not work.

The smartphone should debut this summer and then we will find out about the price that will be asked for it. And at the same time, we’ll understand whether the company decides to dump prices for its own salvation.

Taiwanese smartphone manufacturer, HTC has not had the best of times in recent years. The company has been losing money and it seems to be running out of ideas. A few weeks ago, the company released its financial results for the month of April. Once again there is nothing to celebrate; sadly. The latest data does indeed confirm the fact that the Taiwanese manufacturer continues to experience a crisis.  Talking about the numbers, HTC has an overall revenue of $10 million for the month of April. This is a 31.25% decrease relative to the previous month and as much as 49.86% relative to April 2019.

However, its poor performance in the smartphone market is not deterring the company. According to recent reports, HTC will make a come back to the flagship smartphone market after a long time out. Although more than half of the company’s energy is invested in the field of VR, HTC’s mobile phones still seem to be slowly advancing. Well, let’s not talk about the HTC Exodus crypto phone, it is a total failure because it would take over 170 years to earn back its initial cost.

Next Android 11: Google makes it difficult to install APK files