ZTE is one of the top Chinese manufacturers which has been at the hub of some controversies in recent years. These “controversies” center around the ban by the U.S. which almost completely crippled the company. After paying huge sums, the company had to change its entire executive to meet with the U.S. demand. Now, ZTE is getting back to business and it appears to be finding its feet again. 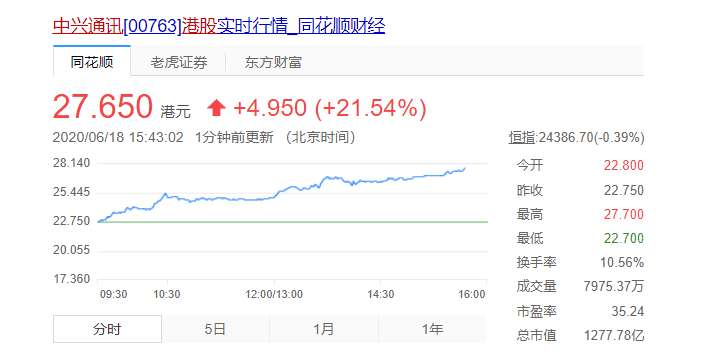 A few days ago, there were some positive reports from ZTE. The company claims that it has its design, development capacity & mass production capacity for advanced chips. Well, it appears that these positive reports are very vital to stocks. After the news, ZTE’s Hong Kong stocks continued to rise. Before the close of work, ZTE’s Hong Kong stocks hit HK$27.65, an increase of up to 21.54%. This is the highest ZTE stock performance in recent times.

In addition to its chip design, development capabilities, and mass production of 7nm chips, the company says it has been commercialized in the global 5G scale deployment. Furthermore, it is currently importing 5nm chips.

On the 17th, some investors questioned ZTE, hoping to understand the progress of 5nm process chips. In this regard, ZTE revealed that the company has chip design and development capabilities. Its 7nm chips have been mass-produced and commercialized in the global 5G deployment, and 5nm chips are being imported.

After its early years’ progress, ZTE seems to be coming back

ZTE Executive Vice President and Chief Operating Officer, Xie Junshi, has previously stated that ZTE’s annual R&D funds hit 12.1 billion yuan ($1.7 billion) in the past three years. However, these funds have not been quickly converted into profit. ZTE needs to quickly transform its technological leadership in the market to raise the profit level. For this reason, the company is making some internal adjustments.

He said that in the important chip supply, ZTE has full process coverage in chip R&D and design capabilities. The earliest architecture design, simulation, front-end design, back-end physical implementation, packaging, and testing design, packaging testing, and corresponding chip future failure analysis, etc., can achieve R&D design throughout the life cycle. This is the absolute leading position in the industry.

For ZTE, this is an important position to get the company back to greater heights. However, it must translate its investments into profits. If that is not the case, then the company may be going under as fast as it hit the surface again.

Next iPhone 12 will have a 4G low price version - Analyst