Since Apple itself is responsible for the iPhone and the iPad software and hardware, in iOS, the problem of not updating to new versions is much less serious than in Android. According to Apple, 92% of smartphones released by the company over the past four years have been running on iOS 13. For comparison, Android 10 is currently installed on only 8.2% of smartphones.

Apple has published statistics that better compare the success of the latest versions of iOS with Google’s attempts. It turned out that 92% of iPhones released since 2016 are running iOS 13! iOS 12 is installed on only 7% of smartphones, more early versions are present on only 2% of devices. Among all active iPhones, the indicators are: iOS 13 – 81%, iOS 12 – 13%, earlier versions – 6%.

Last year, the company introduced a special version of its own iOS for the iPad. It is called the iPadOS and is currently installed on 93% of all Apple tablets introduced in the last 4 years. iOS 12 only works on 5% of tablets, while older versions use only 1%.

The data was collected by Apple on June 17 among all devices that visited the App Store that day. Similarly, Android statistics are collected by Google Play. 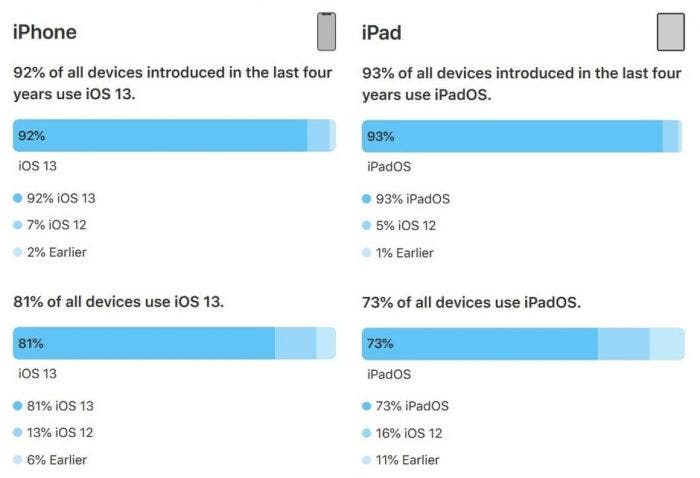 Apple may rename iOS to iPhoneOS and iPhone to Apple Phone

Apple’s iOS, the legendary operating system for iPhones is often considered the holy grail of smartphones. It is considered stable, smooth, and safe for its enthusiasts. Moreover, there’s almost no fragmentation between iPhones, since Apple manages to provide the most current version of its software to several of its devices, new and old ones. We have to agree that Apple has the perfect marriage here by having full control over its hardware and software with iOS. According to a report, the biggest overhaul on the iPhone’s operating system is coming – from iOS to iPhoneOS.

Back in the last year, Apple revealed iPadOS. Instead of providing a new iOS version for its iPad lineup, the company created a separate branch of its software focused on tablets – iPadOS. Apple Watch already has WatchOS, Mac has macOS, and now, a leak points out that Apple will rebrand its mobile operating system to iPhoneOS. Like it or not, you have to agree that this change makes perfect sense. Apple wants to have the image of its software versions directly associated with the product they are respectively focused on.

The info comes from a reliable leakster, Jon Prosser. He is very familiar with Apple-related information. Moreover, Max Weinbach of XDA-Developer further endorsed the reliability of this news. According to Weinbach, he received a mail stating that Apple will rename iOS to iPhoneOS. The XDA-Developer stated that the email even mentioned that the iPhone will be renamed Apple Phone. Okay, this is a big change, and we’re not sure about that. After all those years, would Apple rename its smartphone to Apple Phone? I think most customers will keep calling it iPhone, no matter what Apple says. So in the end, a change of this kind doesn’t make big sense.

Next Realme C11 to get MediaTek G35 SoC, launch in Malaysia