Today, Redmi brand leader Lu Weibing has published a teaser picture on the Weibo social network dedicated to the next milestone in sales of Redmi 8 smartphones. As it turned out, currently the sales of the series models have exceeded the mark of 19 million units. This includes Redmi 8, Redmi 8A, Redmi 8A Dual and Redmi 8A Pro models. 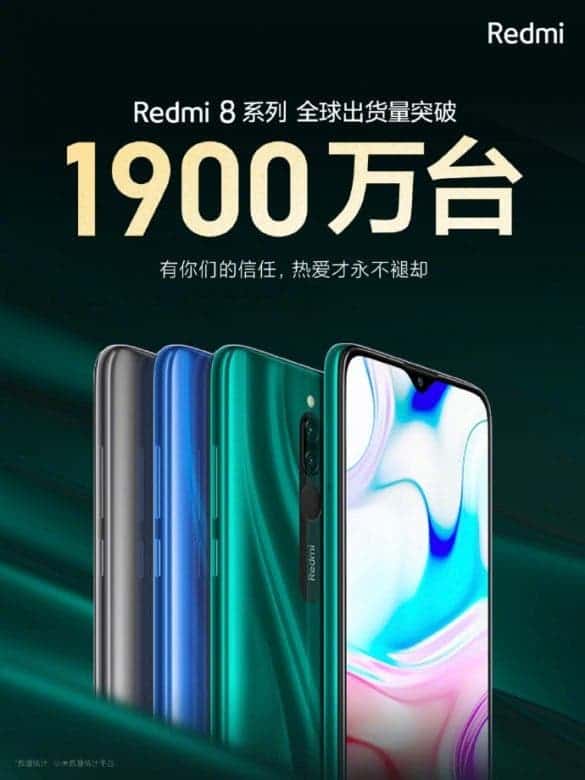 In his message, the head of the company noted that a full upgrade of the Redmi line, marked with a five-star rating for high quality, will be released soon. This seems to contain a hint of a local announcement of Redmi 9. The global version of the model has introduced 11 days ago. It received a quad camera, a MediaTek Helio G80 platform, NFC and a 5020 mAh battery. Here is a reminder of its full specifications:

Xiaomi’s budget line of Redmi-numbered phones has lost some space over the past years. The truth is that customers nowadays are much more interested in the Note lineup than the regular Redmi phones. This forced Xiaomi to decrease even more the level of specifications on these devices to the point that it almost became pointless. Let me clarify. Last year, the company announced the Redmi 8A with the Snapdragon 439. The A-phones are the most affordable devices offered by the company offering solid, but modest specs for a low price. The Redmi 8, should, in theory, offer more than the Redmi 8A, however, it came with the very same chipset and battery. The only differences were the presence of a fingerprint scanner and better cameras on the upper model. This year, however, Xiaomi brought the Redmi phone to the place it deserves. The Redmi 9 came with solid specifications and a very affordable price tag.

Previous These Samsung and Oppo phones got price cuts in India