About a week ago, Sony revealed more information about the upcoming PlayStation 5. Amongst other things, the company showed us what this console will look like. However, we did not see a real image of the console. What we saw is an official render which is a direct representation of the real deal. Now, we have the first real image of the Sony PlayStation 5. 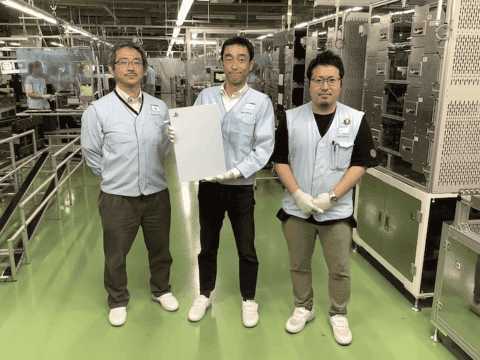 According to the VGC report, a few days ago, the Resetera forum revealed an image of the PS5 production line. This image shows some workers posing with the alledged PlayStation 5. While we can not confirm the authenticity of this image, several reports claim that it is real. Obviously, this image does not look like a photoshop. However, there is no confirmation from SIE regarding this image.

Well, there will definitely be a controversy with respect to the size of this console if this image is true. The company will have to deal with this after the PS5 conference. Before now, Matt MacLaurin, PlayStation’s vice president of UX design had an interactive section with PS followers where he answered some questions. Responding to the huge size of PS5, MacLaurin said that it is necessary to solve the heat dissipation problem.

In his view, PS5 does not want to repeat the mistakes of PS4/PS4 Pro. Recall that PlayStation’s last two consoles have been criticized by many players because of fan noise. According to reports, the Sony PlayStation 5 is entering the final stage of production. The latest report from Digitimes claims that PS5 will start testing this month and then start delivery to downstream manufacturers. The general expectation is that PS5 production will peak in August.

As for its official release to the market, it will happen in the Christmas season. However, we do not have an official confirmation on the price of this device. The new host adopts a new two-color “sandwich” design. It comes with a standard model that uses an Ultra HD Blu-ray drive and a digital model without an optical drive.

There are four other accessories, including PULSE 3D wireless headset, HD camera, media remote control, DualSense charging stand. Previously, the French Amazon page revealed that the Sony PS5 will arrive with a 499 euro ($559) price tag. In addition, there are also reports that the CD-ROM version will sell for 399 euros ($447). While these prices are ideal, there is no official confirmation. We will have to wait until November 20 at the earliest to get some official price information.

Next These Samsung and Oppo phones got price cuts in India