“We’re energized by the positive impact Apple Watch is having on our customers and are excited to deliver meaningful new tools that support their health, fitness, and wellness,” said Jeff Williams, Apple’s chief operating officer. “watchOS 7 brings sleep tracking, automatic handwashing detection, and new workout types together with a whole new way to discover and use watch faces, helping our users stay healthy, active, and connected.”

Without further ado, let’s dive in the goodies introduced in watchOS 7.

Apple Watches are the central and most important part of the overall experience. It provides customers with valuable information at a glance, the possibility of customizing those faces is vital for making the Apple Watch yours. The new firmware version offers new ways to discover and share unique combinations and allows you to configure the watch face to suit your activity and lifestyle. Apple wants to offer an infinite set of customizable and personalized faces. The new face can be shared through Messager or Mail applications and can also be discovered through the App Store or even from links through websites and Social Media channels. 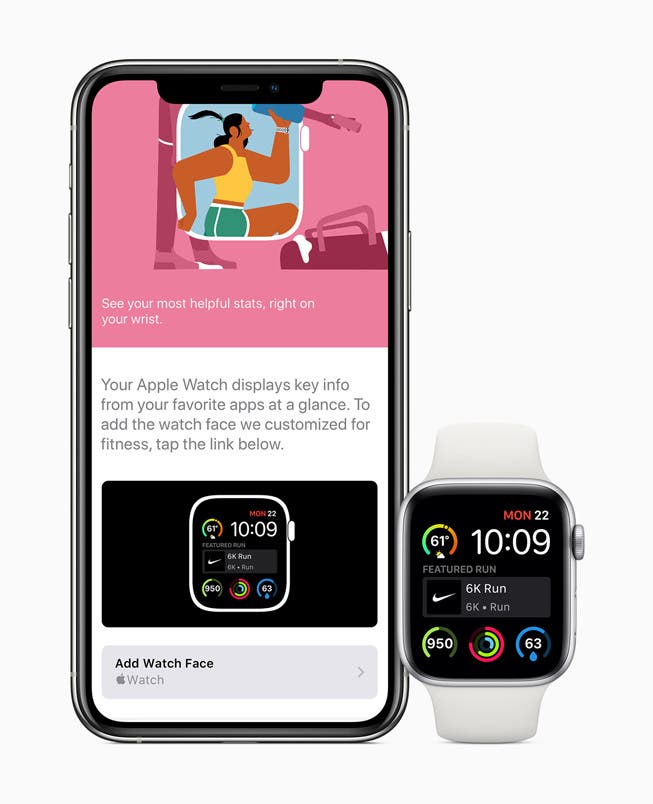 The new firmware offers updates to faces allowing deep personalization and greater access to your favorite applications. The beautifully detailed and ultraprecise Chronograph Pro includes a tachymeter to calculate speed based on time traveled over a fixed distance, the Photos face offers color filters, and the bold X-Large face has been further improved. This is just the beginning as developers will soon explore all the features and bring more faces to Apple Watch.

Worth noting that developers can offer more than one complication per app on a single watch face. For instance, on one watch face, Glow Baby can display multiple combinations that help parents to track bottle-feeding, breastfeeding, pumping statistics, and nap times.

This might be a common feature among fitness trackers and Android smartwatches, however, it’s the first time that such feature arrives officially for watchOS 7. Apple Watch introduces the sleep tracking feature straight out of the box. It provides valuable tools to help users get the desired amount of sleep, get to bed on time, and crew a pre-bedtime routine to meet their sleep goals. The Watch will detect micro-movements using the accelerometer to check your breathing during sleep. The Watch will capture when the wearer is sleeping and how much sleep they get each night. You can also check your breathing and more. The monitor will also provide a chart showing users’ weekly sleep trend. 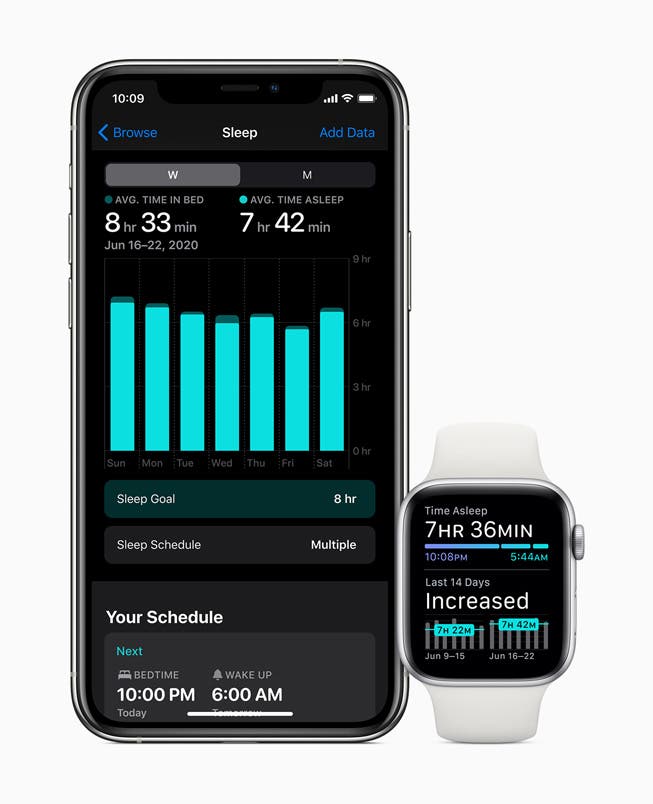 watchOS 7 also brings Wind Down feature to allow Apple Watch and iPhone users to create a customized routine before bed. That includes setting up a specific scene in the Home app, listening to a soothing soundscape, or using a favorite meditation app. In the Sleep Mode, Apple Watch turns on Do Not Disturb and automatically darkens the screen overnight.

To help users to wake up, Apple Watch will offer a silent haptic alarm and gentle sounds. The Wake-up screen shows the current battery level. Moreover, if the battery is too low within an hour of bedtime, the Apple Watch will remind users to charge it ahead of sleep. Sleep Data is encrypted on the device or in iCloud with iCloud sync.

In these days plagued by COVID-19, Apple is introducing an automatic handwashing detection feature. It’s a first on smartwatches. The Apple Watch uses motion sensors, microphones, and on-device machine learning to automatically detect handwashing motions and sounds. It then initiates a 20-second countdown timer, and if the user finishes early, they will be prompted to keep washing. The Apple Watch can conveniently remind the user to wash their hands when they return home.

The Health app on the iPhone will show the frequency and duration of the user’s handwashing. It also provides information on the importance of handwashing, as it relates to overall health. Sounds used to detect handwashing are not automatically recorded or saved by the Health App neither by the Apple Watch.

The Workout app surely is among the most popular applications offered in the Apple Watch. The company is pretty aware of this fact and its introducing four new workout types to the app. The new types are fully supported by the heart rate and custom-built motion algorithms, the new types are Core training, Dance, Functional Strength Training, and Cooldown.

The Apple Watch will use advanced sensor fusion combining data from the heart rate sensor and inputs from the accelerometer and gyroscope to capture calorie exertion for Dance activity. This model comes with four of the most popular dance styles including Bollywood, cardio dance, hip-hop, and Latin. 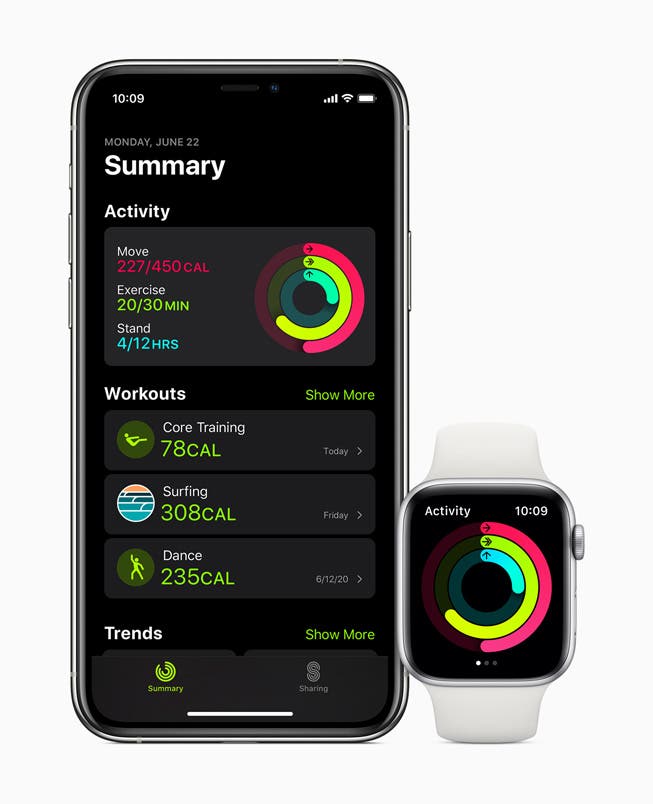 The activity app on iPhone has been redesigned and rebranded to Fitness. It now provides a streamlined view of data including Daily Activity, Workouts, Awards, and Activity Trends on one tab.

On watchOS 6 updates, Apple introduced the Noise app. It measures ambient sound levels and duration of exposure. watchOS 7 is now giving a further step in hearing health with headphone audio notifications. Users will now understand how loudly they are listening to media through their headphones. 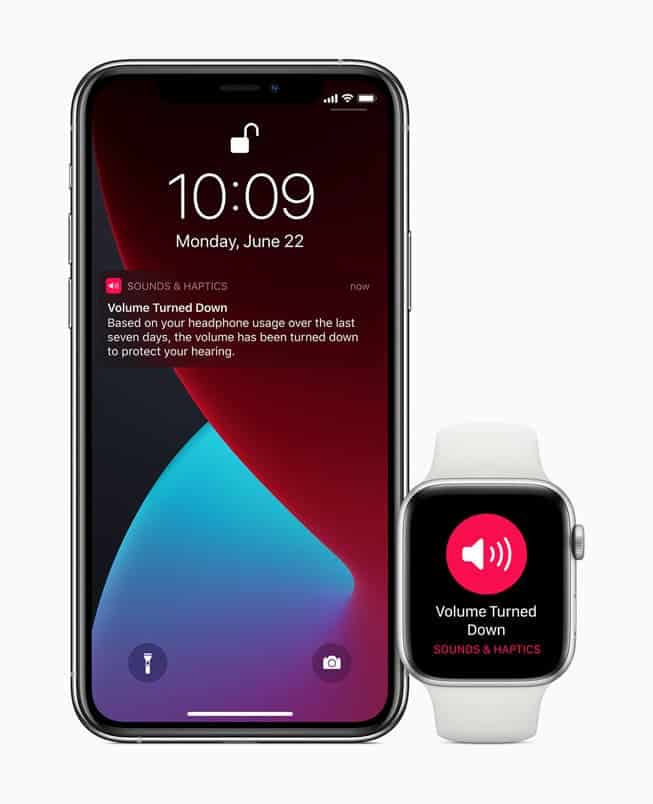 When total listening with headphones has reached 100% of the safe weekly listening amount, Apple Watch will show a notification. The software uses the amount determined by the WHO. For instance, a person can be exposed to 80 decibels for about 40 hours per week. More than that will probably affect your hearing capabilities.

An important part of watchOS 7 is the new privacy features introduced with the software. Apple states that security and privacy is one of its biggest concerns. It’s even more important when it comes to health data, so all health features are designed with privacy in mind. Health data is encrypted on the device or in iCloud with iCloud sync. This date is always in the user’s control.

Previous Scribble Will Turn Your Handwriting To Text in iPadOS 14

Next Apple Macs will come with ARM-based custom processors, will support iPhone/iPad apps and games