iQOO and MediaTek started a long teaser campaign last month to promote the iQOO Z1 as the world’s first smartphone to sport a Dimensity 1000+ 5G chipset. The handset was revealed late in the last month and shortly after the release, a couple of rumors started to point out the arrival of a mid-range phone dubbed iQOO Z1x. Just like its sibling that handset will offer 5G connectivity, however, instead of going on 5G route with MediaTek, the lesser variant will pack a Snapdragon 765G from Qualcomm. Apart from that, the device is said to come with a high-refresh-rate display and 33W fast-charging. That’s a good fast-charging speed, but what will be the battery size? A new leak came today with an answer to this question.

This leak obviously smells a little cheesy, after all it’s an alleged spy photo of the phone showing the Ampere app interface which reveals a 5,000mAh battery. Interestingly enough this battery size is more than what Vivo is offering with iQOO Z1 5G. The flagship has a battery with a rated capacity of 4,500mAh. It’s not the first time that we see mid-range phones sporting big batteries though. Of course, the chipset and other factors will justify the iQOO Z1x smaller price. 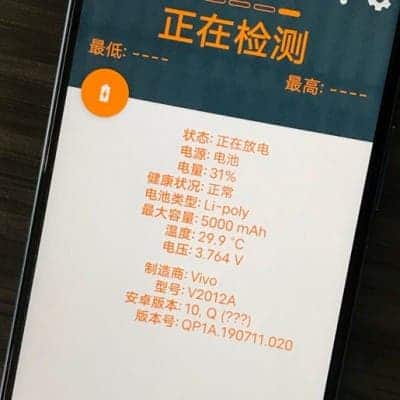 For a quick comparison, the iQOO Z1 boats a 6.57-inch display with a 144Hz refresh rate. It has a 16MP punch-hole camera and a triple rear camera comprising 48MP + 8MP + 2MP shooters. The handset is available in two configurations with 6GB of RAM and 128GB of storage and 8GB of RAM and 256GB of Storage. The iQOO Z1x will most likely not receive a 144Hz refresh rate, perhaps a smaller value of 90Hz or even 120Hz. But the panel size may remain the same as it will be a gaming device. It may also include a cheaper configuration with just 4GB of RAM and 64GB of storage. We don’t have high expectations for the camera department as well, but 48MP seems to be a good standard right now.

According to reports, the Z1X will be revealed later this month and it will be really cheap. For instance, the Z1 sells for about CNY 2,198 (~$310). Therefore we expect to the Z1x to be even cheaper, perhaps on the $250 to $280 price range. That could be really surprising for a device shipping with Snapdragon 765G. After all, companies are pricing devices with this chip like flagships and not as mid-range phones. MediaTek Dimensity line, on other hand, is making 5G smartphones really cheap.

Next The Redmi K40 will be a 5G smartphone, no sense in a 4G variant at this point