Back in December 2019, Xiaomi’s Redmi unveiled the Redmi K30 series consisting in a Redmi K30 4G smartphone with Snapdragon 730G and a 5G variant with Snapdragon 765G. This way, the company could sell the new smartphone in two price ranges as the 5G network was still something not accessible for all customers. However, 2020 has come and several months after the release 5G is now a reality in the mid-range segment. A month ago, Xiaomi unveiled the Redmi 10X 5G with MediaTek’s Dimensity 820 and an affordable price tag. Now, the company is gearing up to launch the new Redmi K40, and launching a 4G variant is pointless.

The Xiaomi M2006J10C will probably be revealed as Redmi K40 or perhaps Mi CC10. This handset was spotted at the 3C department with a 33W charger, the same that comes in the Redmi K30 Pro retail box. Now, the very same handset has appeared on MIIT. The Chinese wireless regulator confirmed a pretty important detail the handset is certified for usage on 5G networks. It’s not a surprise to see the alleged Redmi K40 supporting the new network as the Redmi K30 5G and K30 Pro already support this new connectivity standard. However, it does imply that this time we won’t see a 4G variant of the mid-range phone. 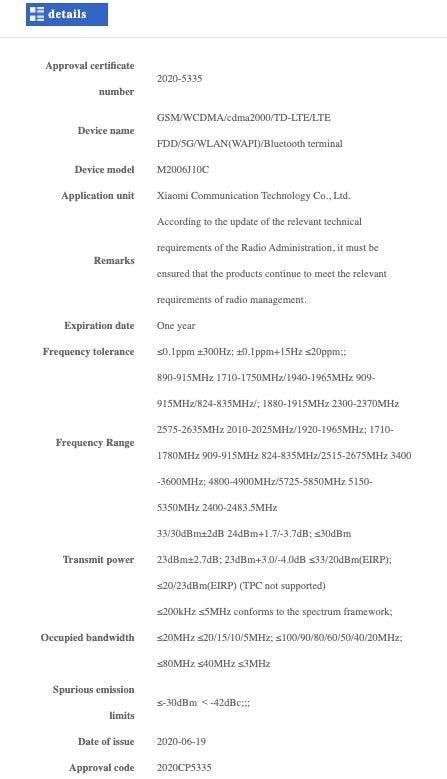 It makes sense for Xiaomi to ditch the 4G devices in the K-series. Apart from being rebranded as Poco X2 in India, the 4G variant of the K30 series is the less interesting device of the series. To make things even more confusing, Redmi launched a Redmi K30i last month which basically is a Redmi K30 5G with a different name. In China, buying a Redmi K40 4G is pointless.

Xiaomi already teased that it would stop making 4G smartphones for China by the end of 2020. Apparently, the K40 will be another step to achieve this goal. Under the hood, the Redmi K40 is probably sticking with a Qualcomm chipset. According to rumors, the phone would come with a Snapdragon 775 SoC. This chipset was supposed to be announced last week. Instead, Qualcomm revealed the Snapdragon 690 – the first 5G chipset in the 600-series. It offers support to global 5G bands of the sub-6 GHz variety. The 690 will be Qualcomm’s answer to MediaTek’s lineup of Dimensity chipsets.

We don’t think that the Redmi K40 will go with a Snapdragon 690 as this smartphone series has been using SD7xx chips since the Redmi K20. Perhaps Qualcomm will, in fact, announce the Snapdragon 775 in the next month. Moreover, the Redmi K40 probably won’t be the only device in the K40 series, we also expect a K40 Pro. Of course, every device in the new series will be sporting 5G-ready chipsets.