Two years ago, Realme debuted as a smartphone brand with the Realme 1. It was a simple start, but then, more smartphones came and the company quickly became the fastest-growing smartphone brand in the world. Realme also is one of the most relevant smartphone makers in India right now, in some cases, being the major competitor of Xiaomi in the country. Despite its start with smartphones, the company is constantly trying to show that it is more than just a smartphone maker. The company already has a huge portfolio of products include TWS earphones, fitness band, smartwatch, and even a smart TV. Now, the company is announcing a new strategy that will bring even more products for different ranges.

The company wants to have a long-term vision, therefore, the company’s Indian CEO Madhav Sheth announced today Realme’s new product strategy – 1+4+N – It means – 1 Core product, 4 Smart Hubs, and N AIoT products. Now it’s important to determine which products are inside of each one of these categories. It’s not that hard all to understand what Realme means with its new product philosophy.

First of all, the company will focus in a core product. Realme started as a smartphone brand and has a lot of them. It’s natural for the company to keep mobile devices at the core of its product portfolio. According to a recent report, Realme will keep prioritizing smartphones for the near future. The company will have smartphones at the core and together with the Realme Link App, they’ll be vital to manage company’s current and future AIoT products.

Moving on to Smart Hub, the company has four product categories on this range – Smart Tv, Smart Watch, Smart Earphones, and Smart Speaker. The only product that still needs to be announced is the Smart Speaker. However, the CEO revealed that the company will unveil one very soon along with stylish smartwatches, high-end TVs, and smarter headphones.

When it comes to the N AIoT products, Realme states that “N” refers to its commitment to bringing new AIoT and lifestyle products. The list of products includes car chargers, smart locks, smart plugs, smart scales, and others. The company shared an image to give us a better idea of its 1+4+N product strategy. 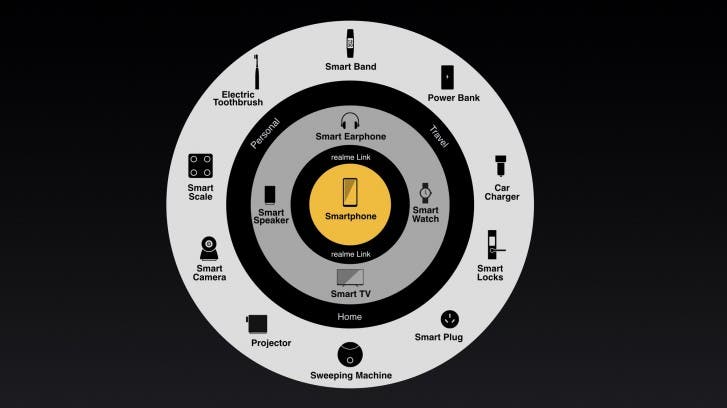 Apart from its product strategy, Madhav Sheth announced the Realme Adventurer Backpack which will be revealed on June 25 along with the Realme X3 series in India.

The CEO further revealed the company’s plans to increase the local workforce strength in India. According to him, the company wants to reach 10,000 in the end of 2020. The distribution channels will also be expanded to Tier 4 and Tier 5 towns of the country. Thus resulting in more than 5,000 jobs in India.

Realme is one of the strongest “Make in India” supporters. The company has invested in a production line to built TV products and TV motherboards locally. Once the setup is done, the company’s recent 32-inch and 43-inch TV models will be made in India.