When it comes to smartphone manufacturing, Japanese manufacturer, Sharp, is one company that has lost its feet. Make no mistake about this, the company is doing well in other businesses but not just smartphones. Today, the company announced that the Sharp AQUOS R5G will arrive in Taiwan on July 2. Prior to this, Sharp AQUOS R5G has been on sale in the Japanese market. Sharp said that even in the severe epidemic situation, R5G sales still exceeded 40,000 units, and continues to increase. 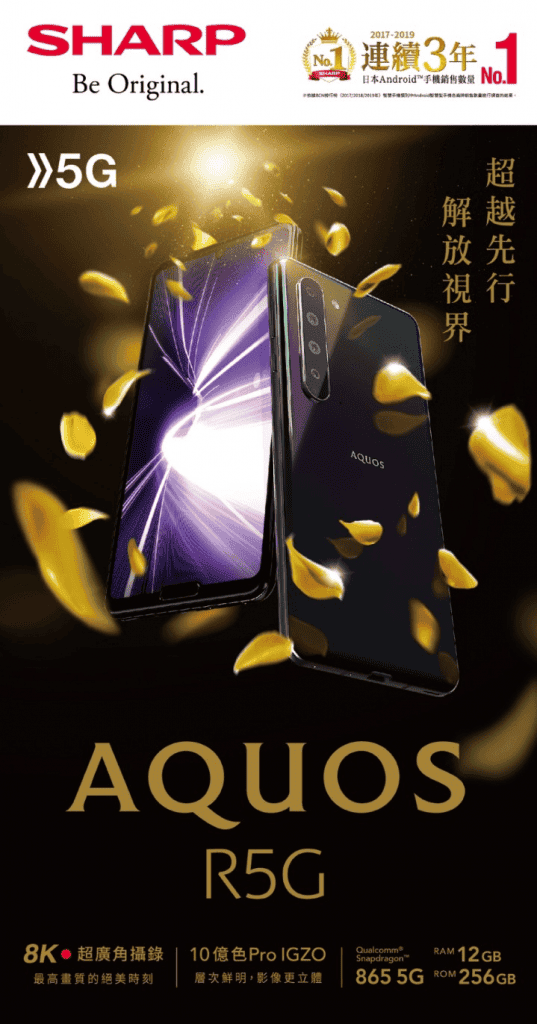 As Sharp’s first 5G mobile phone, the AQUOS R5G is a “dual notch” model, with a waterdrop display. It also has a notch-like design at the bottom of the display. This is because of the embedded front fingerprint recognition. This is the first dual notch Snapdragon 865 flagship smartphone.

It uses a 6.5-inch QHD+ (resolution 3168×1440) Pro IGZO display with a refresh rate of 120 Hz and a maximum brightness of 1000 nits. As said, the Sharp Aquos R5G is a true flagship smartphone, which uses a 6.5-inch Pro IGZO screen. The latter has a resolution of 3168 × 1440, a 120Hz screen refresh rate, and a brightness of 1000 cd/m². High refresh rate screens have become standard for flagship products. So Sharp has decided not to lay behind the top brands. In this regard, IGZO stands for indium gallium zinc oxide. Amorphous IGZO material is a channel layer material used in next-generation thin-film transistor technology and is a type of metal oxide panel technology.

In the core configuration, Sharp AQUOS R5G is equipped with 12GB memory + 256GB storage. In the camera department, it has a waterdrop cutout for the 16MP selfie camera. Going around the back, we have a four-camera array with a 12MP regular shooter with OIS, 12 MP telephoto module with OIS, a 48MP ultrawide snapper, and a ToF module. The phone is also capable of capturing 8K video from an ultra-wide module. To keep its lights on, this smartphone comes with a 3730 mAh battery.

In addition, Sharp AQUOS R5G supports NFC, WiFi 6, facial recognition, IP68 dustproof and waterproof, and so on. As for the price, Sharp will announce it on the day of the press conference.