The details of the upcoming Samsung Galaxy Watch 3 smartwatch continue to leak. Evan Blass – one of the most reliable sources of leaks has published high-quality renderings of the upcoming new smartwatch with the model number (SM-R840). The device is made in 45-mm stainless steel case certified by the army standard MIL-STD-810G, and its display is covered with Gorilla Glass DX protective glass, as the first leaks claimed. 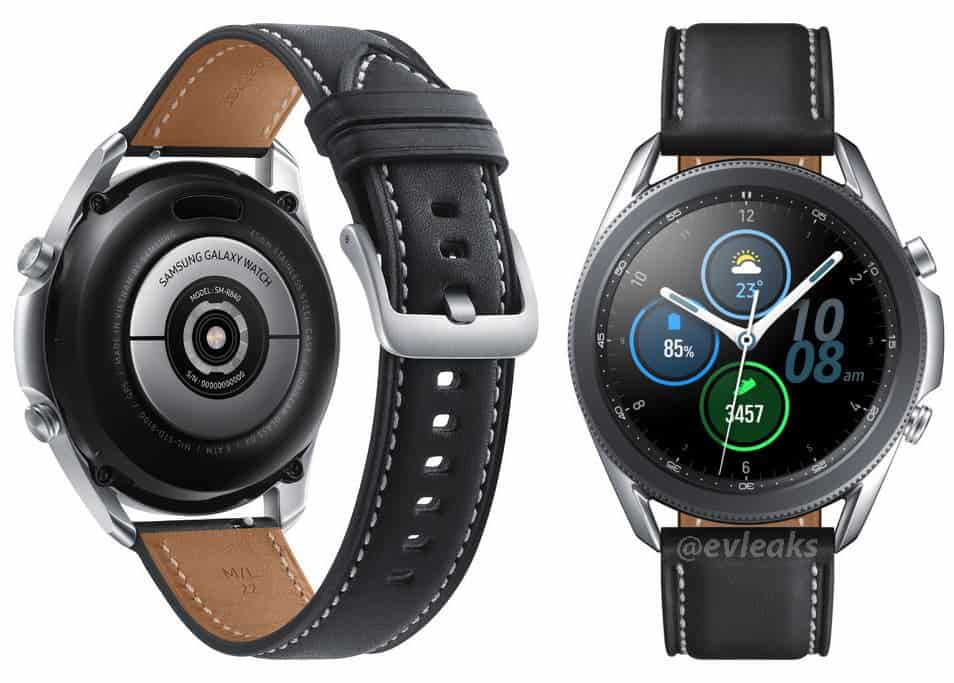 Among other features of the upcoming smartwatch, there is a 1.2″ and 1.4″ displays (for 41 and 45 mm variants, respectively), a rotating frame, the presence of a GPS module and interchangeable leather straps. The autonomy of the gadget, according to the latest rumors, will be about two days. Recall that earlier we met with live photos of two versions of the Samsung Galaxy Watch 3 with a jagged and smooth body.

In general, the new Samsung watch does not look like a copy of the previous model, which someone will like, but someone will not. The watch will also receive 1 GB of RAM and 8 GB of storage memory. The 45 mm version will receive a 340 mAh battery.

Samsung is actively preparing the Galaxy Watch 3 smartwatch. It should be released simultaneously with the Galaxy Note 20 in early August. Despite the fact that more than a month remains before the premiere, live photos of the Galaxy Watch 3 has recently appeared on the Web – for the first time with the screen on.

Judging by them, the interface will not change much. And the entire set of standard applications from the current Samsung smartwatch will switch to new ones. However, there are some minor changes: for example, the Galaxy Store icon has slightly changed in design and color. This may indicate a new version of Tizen OS, which will be presented simultaneously with the Galaxy Watch 3.

Samsung does not want users to have the false impression that their upcoming smartwatch will be inferior to Galaxy Watch Active2, for that reason, it comes with Watch 3 moniker. Usually, we take certification documents to testify when a device is close to release. Recently, India’s Bureau of Indian Standards (BIS) listed three distinct device models: SM-R845F, SM-R755F, and SMR850F. The latter of these remains a mystery, the other two already come-up in recent Bluetooth Certification documents. These are version models of the upcoming Galaxy Watch 3. The new smartwatch should be available in two distinct size options – 41mm and 45mm.

Previous USDoC: Huawei has been completely blocked, no more loopholes