Huawei’s Honor is preparing a set of new smartphone launches for July. First of all, we have a brand new Honor X10 Max, for lovers of big displays, we’ll also have a new Honor X10 Pro, and therefore, the Honor X10 series will be complete. However, the X10 series isn’t the only smartphone lineup getting bigger next month. Honor will also unveil a new handset dubbed Honor 30 Youth Edition 5G. The phone has been stealing the headlines since May, and now it finally has an official launch date.

According to Honor Weibo official account, the Honor 30 Youth Edition 5G will be launched on Thursday, July 2. That’s the same date when the company will unveil the Honor X10 Max. We also know that this smartphone will carry Honor 30 Lite 5G moniker in overseas markets. However, it probably won’t be launched in Global markets in the same date as China.

Honor’s poster shows the smartphone in two distinct colorways, both featuring a gradient finish. It also confirms the presence of a triple-camera array on the Honor 30 Youth and a side-mounted fingerprint scanner. Apparently, the triple-camera array will carry a 48 main camera, while the other two will probably be an 8MP ultra-wide unit and a 2MP sensor for macro shots or depth reading. Up to the front, the handset will have a 16MP selfie snapper. 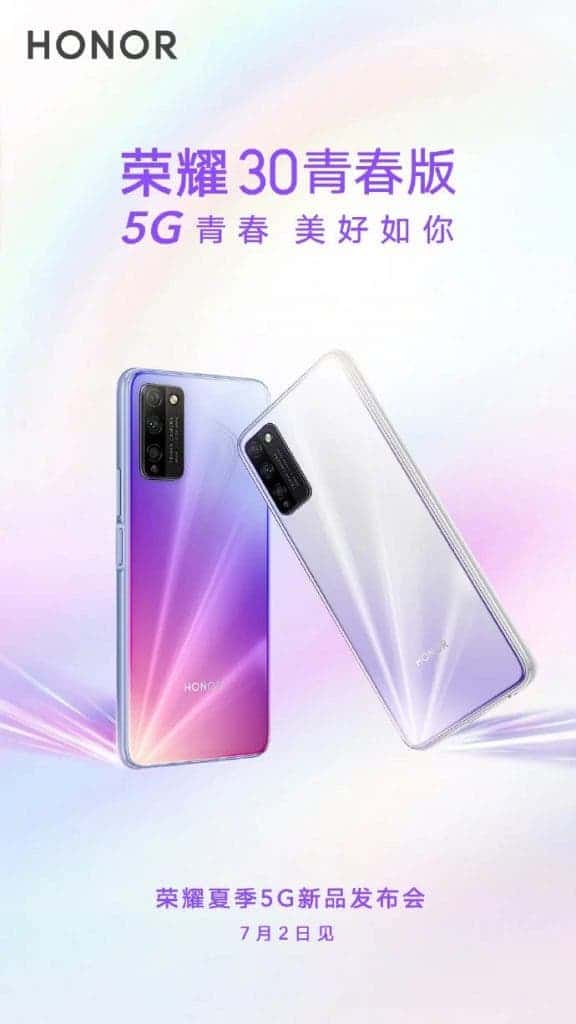 According to leaks, the handset will be powered by MediaTek’s Dimensity 800 chipset. This is an octa-core CPU powered by 4x Cortex-A76 cores clocked at 2.0GHz. The other four cores are power-efficient Cortex-A55 cores. The chipset features Mali-G57 MC4 GPU that combined with MediaTek HyperEngine 2.0 ensures the best gaming experience, touchscreen responsiveness, and picture quality enhancements. The chipset also is fully integrated with 5G NR (sub-6GHz) offering full 2G-5G support and power-efficiency with carrier-aggregation feature included.

The Honor 30 Youth Edition will also carry a 4,000mAh battery with support for up to 22.5W fast-charging. The device will come with a 6.5-inch display with a resolution of 2,400 x 1,080 pixels and a refresh rate of 90Hz. Software-side, the handset will be running the Android 10 operating system with MagicUI 3.1 interface onboard. As usual, it will not include any Google App and there will be no Google Play Store on the device. Instead, users will need to use Huawei Media Services powered with Huawei’s AppGallery.