According to research data from AdDuplex, an Internet data research agency, as of June 29, 7% of PC devices with Windows 10 have installed Windows 10 May 2020 update version. This is quite impressive because Microsoft has been holding back the May 2020 update. AdDuplex’s data is based on more than 5,000 Microsoft Store applications using AdDuplex SDK v.2 or higher. 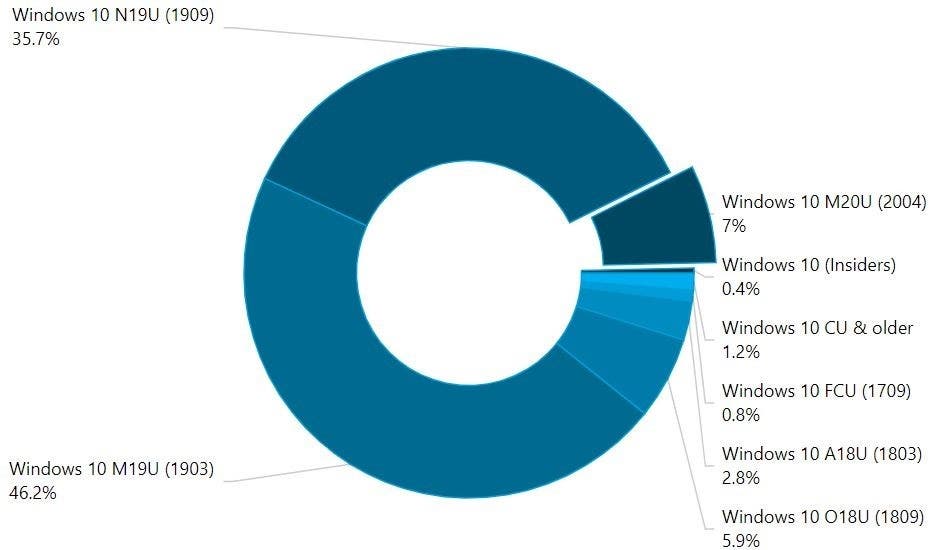 At the same time, the data shows that 1903 is still the most used version of Win10 users at present. It accounts for 46.2%. The 1909 version accounts for 35.7%, but the number of users has decreased compared to the previous month.

Microsoft started to automatically update users using the 1809 version to the 2004 version. Since then, the utilization rate of the 1809 version has fallen the most from the data collected. From 8.3% last month, it is now 5.9%. In addition, users have a lot of problems after the 1809 version upgrade, resulting in Microsoft having to spend more effort to modify it. Thus relative to the version before the 1809 version, the release rate after the 1903 version is much slower.

There were reports that Microsoft quietly accepted that it has some issues with the Windows 10 May 2020 update. This update hit the public at the end of May but Microsoft prevented some devices from getting it. Most of the issues with the update are related to “compatibility hold” which stops the Windows 10 May 2020 Update from being installed via Windows Update. One of the issues involves sudden error or reboots and it affects devices like Microsoft’s Surface Pro 7 or Surface Laptop 3.