A few weeks ago, Redmi announced the Redmi 9 with powerful specifications and a very affordable price tag. The Redmi 9 is set to revolutionize the market of low-end smartphones thanks to its gaming-centric chipset and a Quad-Camera setup. Now, Xiaomi’s Redmi is giving a step further to deliver even more power under a super affordable price tag. The company has just revealed the Redmi 9A and Redmi 9C entry-level smartphones in Malaysia with a very attractive price that starts at RM 359 (~$83). The Redmi 9A and 9C will offer users a big display, huge batteries, and much more. 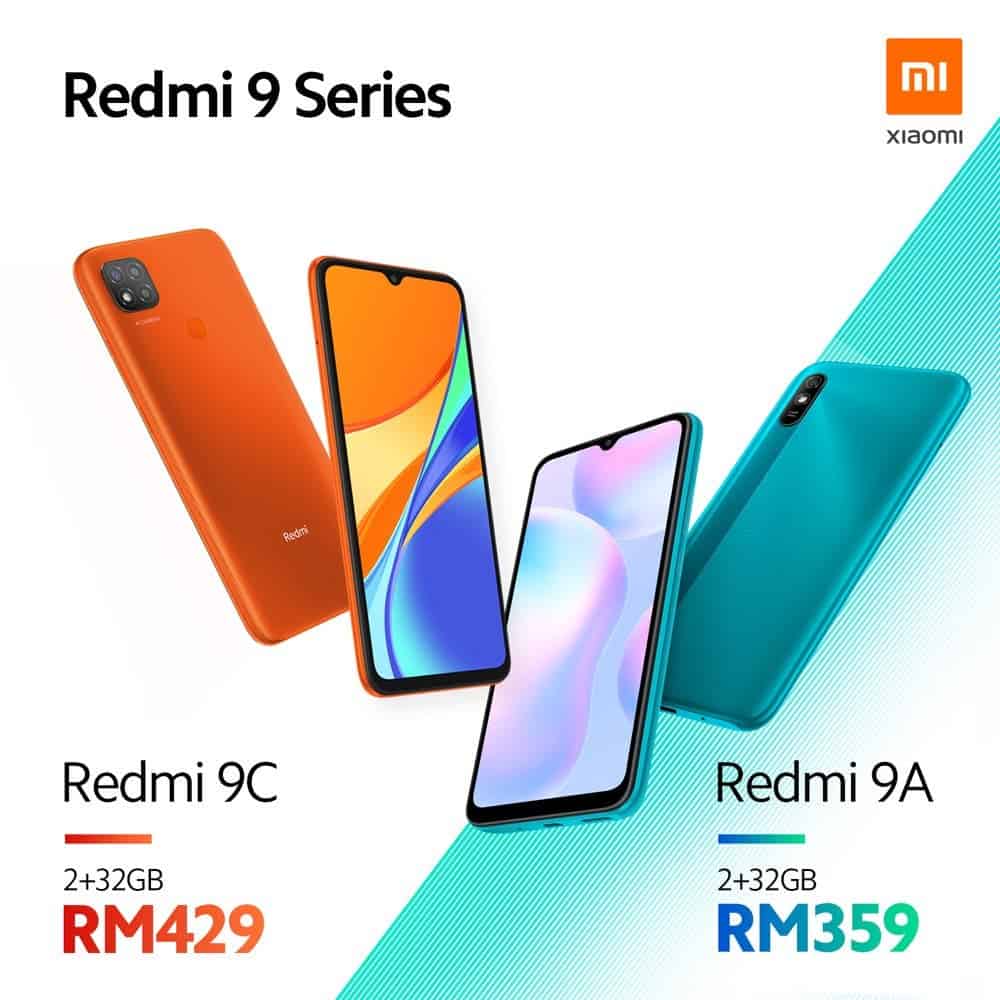 First of all, it’s important to note – The Redmi 9A comes to continue a successful series of affordable smartphones. The Redmi 9C, on the other hand, is a brand new smartphone with the very same affordable characteristics of the 9A but gives a step beyond in terms of specifications. If a good offering that sits between the Redmi 9A and the vanilla Redmi 9.

Both smartphones are equipped with the same IPS LCD of 6.53-inches. This panel offers HD+ resolution of 1600 x 720 pixels resulting in a 20:9 aspect ratio. With this usual aspect ratio, it’s easy to guess that both devices are equipped with a waterdrop notch solution, but Redmi prefers to call it Dot-Drop Notch. The notch serves as a house for a 5MP selfie snapper on both smartphones.

Under the hood, the Redmi 9A boasts the Helio G25 Octa-Core processor that works at 2GHz frequency. The Redmi 9C, on the other hand, has a more capable chipset dubbed Helio G35, it’s an Octa-Core with 8x Cortex-A53 cores clocked at 2.3GHz. The handsets are equipped with 2GB of LPDDR4X RAM and 32GB of eMMC 5.1 Internal Storage. We believe that Redmi will unveil another variant with 3GB of RAM in the future. at least for the Redmi 9C on the future. However, we don’t expect to see an increase in base storage. If that isn’t enough for you, these devices come with a microSD card slot.

Lights are kept on thanks to a huge 5000mAh battery. This capacity is now common among Redmi 9 / Note 9 series. Both devices come with Android 10 OS straight out of the box and MIUI 11 is running atop. Of course, both handsets will be eligible for MIUI 12 update. Other common features include dual SIM slot, 4G VoLTE, Wi-Fi 802.11 b/g/n, Bluetooth 5.0, GPS. Moreover, the device includes a USB-C port, IR Blaster, and 3.5mm audio jack (Thankfully).

“The Redmi 9A keeps the old formula, while the 9C wants to change this price-segment with a triple-camera array”

On the camera department, the Redmi 9A is the simples device of the duo offering a single-rear camera of 13MP. Unfortunately, the Redmi 9A won’t be marked with the arrival of a fingerprint scanner in this series. Thankfully, this lineup got USB-C port since the Redmi 8 series, but unfortunately, we’ll need to wait and see if the Redmi 10A will include a fingerprint scanner. On the other side, the Redmi 9C proves that it is a better smartphone with a Triple camera array. The square-ish island comprises a 13MP main shooter, 5MP ultrawide lens, a 2MP depth assist lens, and an LED flash. That’s a good setup for this price point.

The Redmi 9A will be available in Malaysia through Lazada from July 7. The device will be available in Midnight Grey, Twilight Blue, and Peacock Green colors. It is priced at RM 359, or just over $83. The Redmi 9C, on the other hand, will reach the country by the end of the next month. It’s just a little more expensive at RM 429, or $100 and is available in Black, Orange, and Blue Colors.
For a quick comparison, the Redmi 9 sells in the country for just about RM 499 (~$116). With the two new devices, Redmi has some of the best offers for the sub $120 price point. These devices are likely to hit other markets in the coming days.
Source/VIA :
Xiaomi Malaysia (Facebook)

Next AdDuplex: 7% of Windows 10 users have installed the May 2020 update