Apple almost launched the Apple TV 6 back at the WWDC 2020 event, according to latest reports. However, it was scrapped in the last few hours. The report also adds that the company is prepping for a bigger event in September, quoting a tipster. And it will most likely include the new streaming box with upgraded internals.

The latest leak comes from a Twitter user Jioriku who says that Apple TV 2020 should launch in September. It will boast an A12X Bionic chipset inside. The event will likely have the iPhone 12 series to be the stars of the show.

As for the design, the new Apple TV isn’t expected to bring in a big change in design and colours. The overall footprint of a three-year-old Apple TV 5 is expected to be retained though.

Being introduced in 2018, the A12X packs quite the punch. Clocked at 2.49GHz, the silicon is built on a 7nm FinFET process by Taiwan’s TSMC.

New Apple TV with new storage configurations and A12X Bionic chipset is ready to go. Expect September and no earlier. Apple is currently putting everything together for an absolutely massive September event.

This points to improved thermals with a new cooling solution. This could be a big bump compared to previous model with the A10X Fusion.

This bigger storage, when paired with an alleged gaming Controller that Apple is rumoured to be developing, will open a new door for the Apple arcade that got extended to the TV service almost a year back. 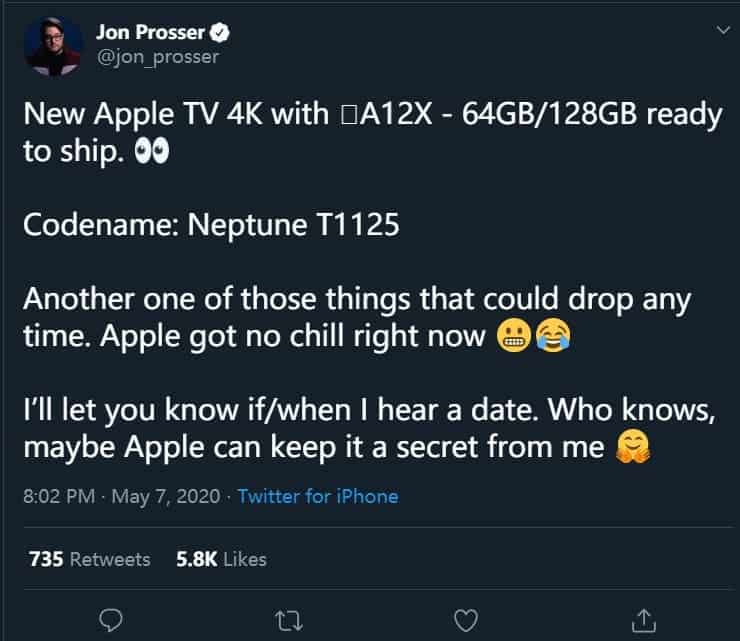 Why did Apple scrap it?

Apple was earlier prepared to unveil the new Apple TV on June 22nd. According to Jioriku, the decision was held back on the verge of the event as Apple somehow realised the September event will most likely be a similar virtual event.

Considering the current situation, holding a physical event is out of the equation now and this could have made Apple think of postponing the Apple TV launch to September to make it even bigger, says the tipster.

The keynote in September is likely to be focused more on the Hardware perspective where Apple could also talk more about the ARM-powered Macbooks. He further says the Macbooks and iMacs are expected to come in both Intel and Apple’s own ARM chips however, the current focus will be on Macbooks.

Let’s wait as more leaks uncover themselves in the run up to September.