According to Counterpoint statistics, in April this year, Samsung lost the title of the world’s largest smartphone manufacturer. It didn’t just lose the position to any manufacturer, it lost it to the embattled Huawei. This is quite surprising because many people did not expect Huawei’s smartphone business to be rising at this time. According to the latest data from Counterpoint, Huawei maintains its leading position in May. However, Samsung was able to narrow the gap. 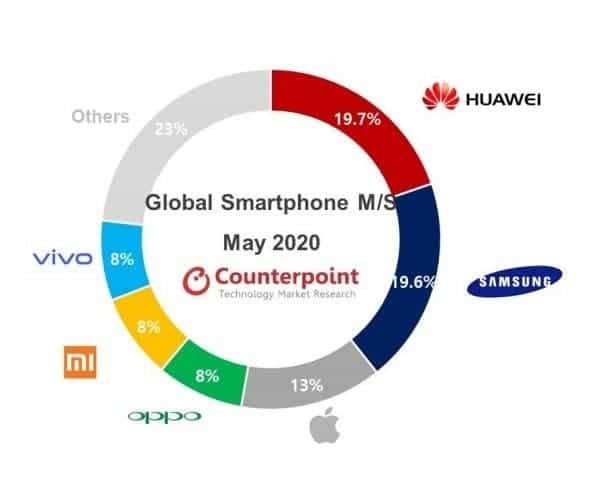 In May, Huawei’s market share was 19.7%, while Samsung closely followed with 19.6%. In May, smartphone shipments were 81.97 million units. However, although Huawei still maintains the title of the world’s largest smartphone manufacturer, it is only 0.1% ahead of Samsung. In contrast, in April, Huawei’s market share was 21.4%, while Samsung’s was only 19.1%.

From this perspective, Huawei may not be able to retain the top position for the third consecutive month. The most probable forecast is that Samsung will once again top the list in June. One of the reasons that led Samsung to close the gap in May was that its sales in the U.S. increased significantly. Overall, smartphone sales in the U.S. increased by 56% relative to April. Out of this increase, Samsung claims a significant part which boosts its sales. In the United States, Samsung accounted for 33% of total sales of 8.4 million smartphones.

According to some Chinese analysts, Huawei was able to top Samsung in April and May because of its early resumption. After the pandemic, Huawei reopened early ahead of time. This helped the company to recover lost ground faster than its competitors. However, now that its competitors are open too, it is losing some of its sales.

In other reports, Huawei is still struggling with its issues with the United States. For well-known reasons, Huawei’s self-developed HiSilicon chip will face a big test. If it is not approved by the United States before September, TSMC may not be able to work for HiSilicon. Fortunately, Huawei already has a guarantee for its 5nm Kirin processor for 2020. Nevertheless, what about Huawei flagships for 20201?

Obviously, it is not possible for Huawei to abandon its smartphone business. There is already an official report that the development of the Huawei P50 is in progress. This smartphone will probably arrive in the first half of next year. Of course, this phone should use the same 5nm chip as the Mate 40 series.

According to a supply chain source (@Mobile Chip Expert), Huawei will have a new mobile phone with a 5nm processor next year. However, this 5nm processor is not designed by HiSilicon. This statement implies that the Huawei’s P50 series may use third-party 5nm processing next year. If we are to take a wide guess, you guess will be as good as mine, MediaTek.

Previous Four Xiaomi Smartphones (5G) For All Groups Of Customers