A few days ago, Apple disclosed its plans of shifting its Intel-powered computers to a new own ARM-based line of processors for upcoming MacBook Laptops. The first MacBooks featuring ARM-based chips will be revealed later this year. Following the company’s shift towards ARM, we have Microsoft, which is also looking to migrate to the use of ARM-based SoC as a Surface Pro model that boasts a Qualcomm Snapdragon processor for Windows 10 on ARM lineup.

The Microsoft model surfaced on the GeekBench 5.x platform as “OEMSR OEMSR Product Name DV”. The model, apparently, is a variant of the upcoming Microsoft Surface Pro X that is yet to be announced. It could pretty much a test unit for the internal testing of Qualcomm’s Snapdragon 8cx Plus with higher clock speed. According to recent reports, Qualcomm is working on “SC8180XP”, which will be officially named Snapdragon 8cx Plus since the current Snapdragon 8cx platform boasts SC8180X code. 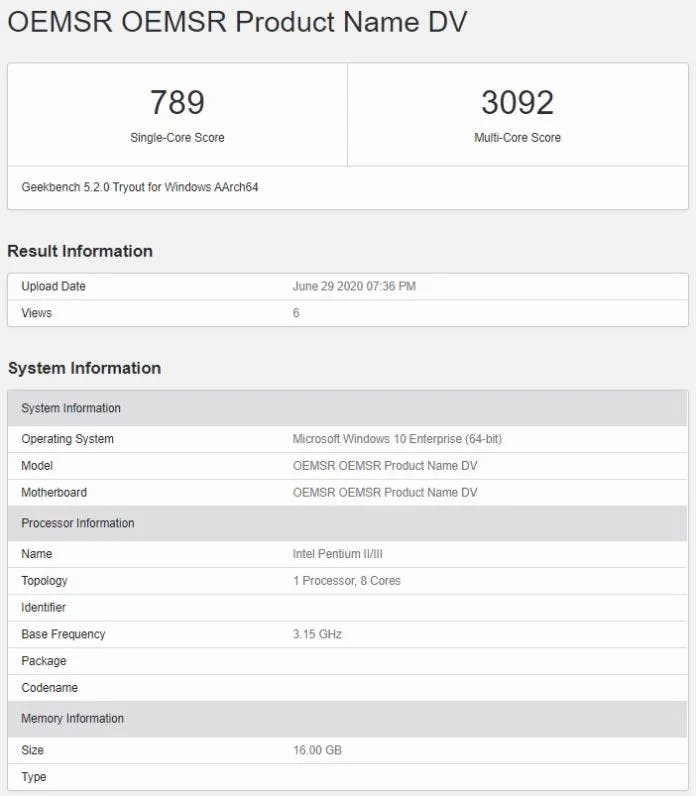 The upcoming Surface Pro device arrived GeekBench packing 16GB of RAM and a base clock speed of 3.15GHz. The higher clock speed usually results in a significant improvement in the benchmark performance. The Snapdragon 8cx platform is clocked at 2.84GHz. Unfortunately, GeekBench doesn’t offer many details but Snapdragon’s new processor for Always Connected PCs lineup might turn Windows 10 ARM a viable option for consumers. The chipset scored 789 points on the Single Core tests and 3,092 points on the Multi-Core tasks.

Microsoft really needs to improve its game with Windows as macOS Big Sur is coming with seamless support for ARM-based apps. We’re yet to see how the new MacBook computers will perform.

In March 8, the company announced the Surface Pro X 2-in-1 notebook in China. The device came in multiple configurations with 8GB + 128GB, 8GB + 256GB, 16GB + 256GB and 16GB + 512GB. The device came with a 13-inch PixelSense touchscreen with a 3:2 screen ratio. The display also has a resolution of 2880 x 1920 pixels of resolution and a 1400 x 1 contrast ratio. Moreover, the Surface Pro X is the thinnest, most powerful, and most seamless Surface Product ever made by Microsoft. The device is the first Microsoft laptop to sport Windows 10 on the ARM platform.

The device came to meet consumer and enterprise needs. However, it also started a new mobile computing era. Qualcomm has been driving the development and innovation of the PC industry, in order to bring the best of smartphones to PC users. Qualcomm is expanding its platform, and apparently the upcoming Snapdragon 8cx Plus will be a step further for the company as well as for Microsoft.

Next Google Pixel 4A receives IMDA and BIS certifications