Xiaomi‘s independent sub-brand Poco is currently working on a brand new smartphone dubbed Poco M2 Pro. Since the last couple of weeks, the device has been making the round on the internet thanks to numerous leaks and rumours. Yesterday, the Poco India division officially confirmed the existence of such device and furthermore, announced the official launch timeline. If you missed that, the device will see its official unveiling on July 7. Ahead of the official launch, Poco M2 Pro has now appeared on the GeekBench listing and this time it sports 6GB RAM and much more. 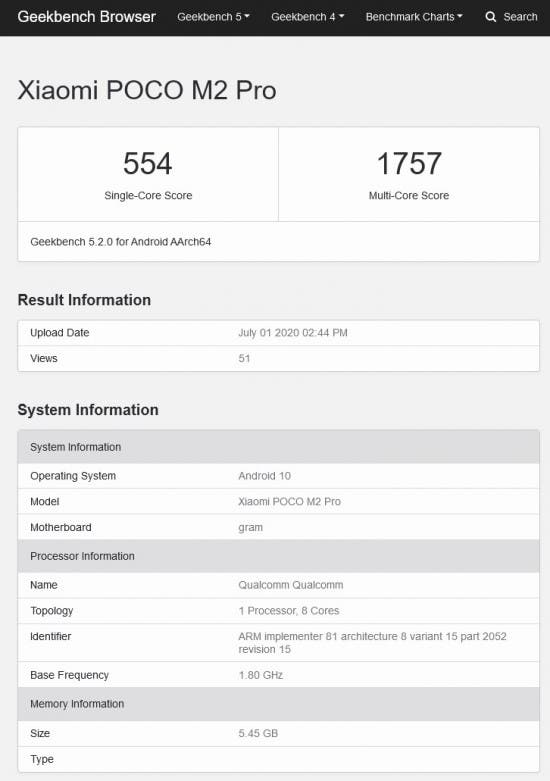 The upcoming smartphone appears on the GeekBench listing with the model number “Xiaomi Poco M2 Pro”. Surprisingly, we didn’t see any alphanumeric based model number. The smartphone spotted featuring 6GB RAM along with an unnamed Qualcomm chipset. The SoC comes with the base clock frequency of 1.80 GHz. We are already aware of the fact that M2 Pro will arrive with Snapdragon 720 chipset. Furthermore, the device is running the latest Android 10 operating system. Coming to the benchmark scores, the device managed to score 554 points in single-core performance and around 1757 in the multi-core benchmark.

With that said, the listing doesn’t really talk about anything which is generally expected with a typical GeekBench listing. Various previous report points towards the fact that Poco M2 Pro is nothing but a rebranded Redmi Note 9 Pro. If that’s the case, then we already know what to expect from the smartphone after all. In terms of display, we can see a 6.67-inch IPS LCD panel with Full HD+ resolution. The device should run on Snapdragon 720G chipset since the official teaser also teases the performance side of the device. Lastly, we will see a side-mounted fingerprint sensor along with a large 5,020 mAh battery packed inside.

For all those who were on the edge of their seat. It's time to #FeelTheSurge with the #POCOM2Pro.

As mentioned earlier, Poco will launch its upcoming M2 Pro smartphone on July 7 at 12 PM. The teaser officially confirms that the device is going to be a Flipkart exclusive. Back in 2018, Poco launched its first smartphone dubbed F1 Pro which managed to receive a lot of positive criticism from critics and tech community. It was due to the fact that the device was offering a flagship-level performance at a budget price tag. Now, it looks like Poco has changed its ideology by offering mid-range chipset in its devices. Furthermore, it looks like the company is focussing highly on rebranded devices.

Next iQOO Z1x with 120Hz refresh rate, punch-hole display to launch on July 9