Realme is a big success, in two years of existence, the brand managed to have some of the best-selling smartphones in the segment. Apart from the compelling hardware and affordable price, the firm also provides good software support. This year, the company made a further step to establish its own software identity with the introduction of Realme UI 1.0 based on the Android 10 update. Previously, Realme phones were running Oppo’s ColorOS. While there are still a few devices waiting for Android 10, the company is already working in the next big thing – Android 11. Today, Realme announced that it is recruiting testers for Android 11 on the Realme X50 Pro flagship.

The update is meant for experienced developers only

The new update package will be based on Realme UI, but it will not include all stock Android built-in features. The update is in a very early stage and may contain bugs. For that reason, the company is asking only for experienced developers. Users interested on the beta testing program will have to flash the ROM of the phone. Hence, it is not an update meant for people with little no experience. The company keeps stating that there are a lot of unfinished things on this ROM. Currently, some features like automatic timing function are not working, for that reason, manual timing is required. According to the company, some system functions are not working and UI smoothness is less than desirable. 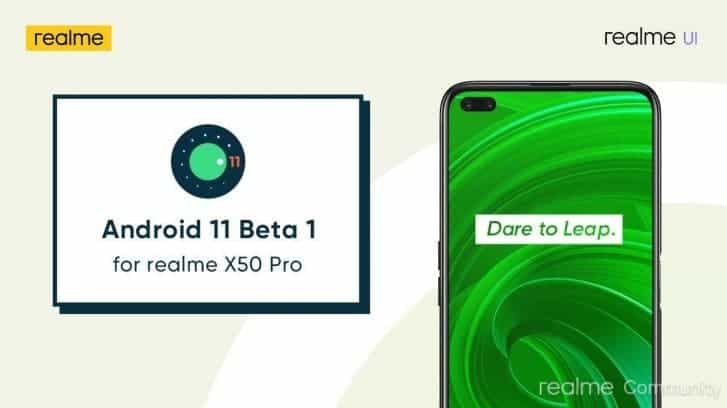 Furthermore, some third-party apps may not work properly and the system may have “some stability problems”. If that still isn’t enough to hold you back, make sure to have the exact model number RMX2076. Moreover, you should be running the latest Android 10 version package carrying the RMX2076PU_11.A.25. Realme has provided packages both for the latest OS update and the update to Android 11 Beta 1. Therefore, it’s possible to easily roll back to Android 10 if you’re not satisfied with the Android 11 experience. For more details check the source link.

Realme X50 Pro is the company’s second flagship after the Realme X2 Pro. The device is very powerful boasting the Snapdragon 865 chipset which ensures seamless 5G connectivity. The processing power is paired with up to 12GB of LPDDR5 RAM and 256GB of UFS 3.0 internal storage. The handset has a 64MP AI quad-camera with 20x Hybrid Zoom and 32MP dual front-camera setup with an ultra-wide-angle lens. The device draws power from a 4,200mAh battery with a 65W SuperDart flash charge.