In the field of advanced chip manufacturing, only TSMC, Intel, and Samsung are on top of the game. At present, the competition between TSMC and Samsung below 7nm has attracted much attention. According to recent reports, Samsung will directly skip the 4nm advanced process and move to mass production of the 3nm process. This may take Samsung ahead of TSMC, but this is also full of risks for the former. If Samsung kips the 4nm advanced process, it means that it is completely abandoning its investment plan. This decision may eventually cause its domain to lose a lot of orders. 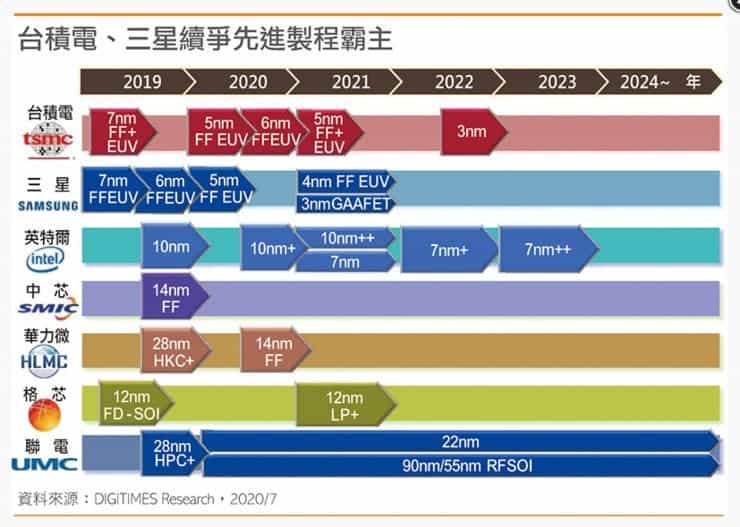 Why Samsung decided to skip the 4nm process

The competition in the chip industry is extremely fierce, especially in the field of advanced processes. Samsung is one of the very few companies that have the potential to challenge TSMC, the chip foundry leader. In fact, in 2019, there were hopes that Samsung will defeat TSMC in the 5nm process. However, in the end, it did not succeed, nevertheless, the competition between Samsung and TSMC continues. This time, the plan is likely to be part of the competition strategy.

As Samsung’s biggest competitor, TSMC’s process technology is more than a year ahead of Samsung. It has increasingly become the first choice for foundries of chip manufacturers. Process orders below 7nm are almost full. Although TSMC may lose its second-largest customer, Huawei HiSilicon, it is getting new orders from the likes of MediaTek, Qualcomm, and others. It is expected that by 2020, TSMC’s 7nm and 5nm combined revenue will reach 40%, plus strong demand for 16nm process orders will account for about 20%.

The risks if Samsung skip the 4nm process

First, Samsung will gradually reduce the chip size to improve efficiency. This process has always been stable. In the past few generations, companies largely rely on mass-produced chip processes to develop next-generation processes. Skipping the 4nm process will prevent Samsung from tackling 4nm issues. This means that its 3nm process will not have a solid foundation.

In addition, the company also faces risks in raising funds. Although it has secured some orders to mass-produce 5nm chips for Qualcomm’s Snapdragon X60 5G modem and is expected to maintain its 5nm production in 2021, its potential partners are about to launch products based on the 4nm process. If the company then jumps to 3nm, a large number of potential orders will probably be lost. This will result in more customer orders for TSMC, which is about to launch 4nm mass production.

The South Korean manufacturer may offset these losses by cutting the costs of other OEMs, making its solution more attractive, but this does not guarantee the effectiveness of this initiative. Mainstream chip companies hoping to achieve the best performance will undoubtedly turn to a more efficient 4nm chip.

Previous Its official: "Dirt 5" will support 120FPS on Sony PlayStation 5