Huawei might be finally entering the display monitor segment. Reports from China indicate that Huawei might tuck the display somewhere into the company’s current ecosystem. This is part of Huawei’s vision in its quest to become self-reliant.

A potential rival to the Redmi display

The initial leak is by a popular tipster on Weibo stating that the Huawei PC monitors are at three price points. Starting with the low-end budget machines and going high up with mid-range and high-end displays. While he hasn’t mentioned the exact date, we are assuming that it might come in the next few months. Or, it may debut alongside the Mate 40 series that is rumoured to launch in late 2020.

Further, reports from China have said that one of the Huawei PC monitors will be a 32-inch with a 512 or a 1024 partition. This would be similar to those found on the miniLED backlit displays. Additionally, Huawei will integrate the displays into the company’s ecosystem which will reportedly help them connect with Huawei phones.

On track to building a separate ecosystem

This goes in line with the company’s earlier announced 1+8+N strategy by which the smartphones will be the center of the hub. This will be followed by different smart system products like smartwatches, sport & health, TV, audio etc. Also, Huawei has also been actively working and looking to create an exclusive ecosystem for itself. By infusing its products with the Hongmeng OS, the company wants to create an Android competitor. This has been further buoyed by the tussle with the US which made the company drop out of GMS. 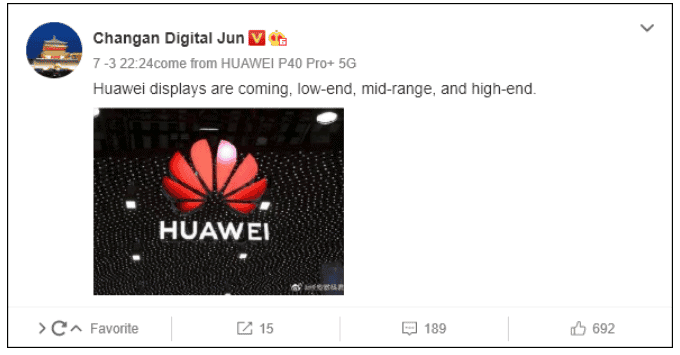 Huawei displays have been in development for a while now. Reports state that the company has been testing them for a year. However, the monitors are yet to hit the shelves in the market. While the reason for the delay is not known as of yet, this could be the perfect time for the company to debut them as it looks to expand the portfolio amidst a lot of tensions.

In similar news, the company is also expected to bring desktop PCs to the Chinese market. Not long ago, the company’s in-house PCs hit the 3DMark testing and were spotted with AMD Ryzen 5 Pro 4400G a six-core, 12 thread CPU clocked up to 4.3GHz. However, it did miss out on the GPU leading to speculations of a budget mini-PC from Huawei.

Nevertheless, the company seems to be on the right track and let’s wait for more intel to see if they rival the likes of Redmi and other company’s displays in the market.

Previous Vivo Y70 full specifications revealed ahead of the announcement

Next Poco M2 Pro: More details emerge in an interview