Chinese manufacturing giant, Huawei, has been at loggerheads with the American government. Early last year, the U.S. banned Huawei from doing business with American companies. The major effect of this ban on Huawei is that it cant use Google Mobile Services. This means no Gmail, Google Maps, and others. However, it can still use the open-source Android system. Without GMS, Huawei’s smartphone sales will greatly plunge in markets outside China. While this has been the case, its overall smartphone sales are still booming. In 2019, Huawei smartphone sales hit 240 million units, a new record high. Furthermore, in April 2020, Huawei toppled Samsung to become the top smartphone brand in the world. 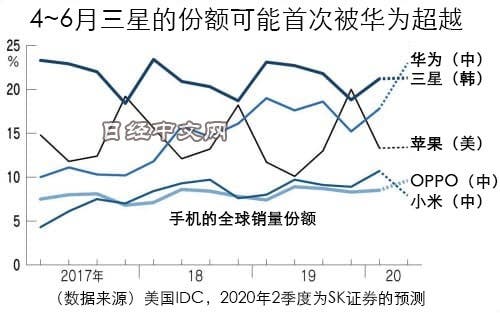 In May, Huawei retained its position as the top smartphone brand globally. However, the percentage difference between Huawei and second-place Samsung is only 0.1%. This sparks speculations that Samsung takes back its top position in June. Nevertheless, a recent report from Nikkei Asia, Huawei will likely retain its top position in June. The report claims that in the global smartphone market from April to June, Samsung Electronics is likely to give up the throne to Huawei.

Due to the longer lockdown period as a result of the coronavirus pandemic, Samsung’s shipments will probably decrease by approximately 30% year-on-year from April to June. Since Huawei’s present major market is China, the company’s sales will decrease only slightly. The sluggish sales of smartphones will affect Samsung’s overall performance.

Samsung’s April-June consolidated financial report (Express Value) released on July 7 showed that operating profit was 8.1 trillion won, an increase of 23% from the same period last year. The operating income decreased by 7% to 52 trillion won. According to estimates by SK Securities in South Korea, Huawei’s mobile phone shipments in April-June were 55 million units. Samsung has only 51 million units.

Huawei still has to deal with the U.S. ban

While Huawei’s smartphone business seems to be doing well, the American government is extending its ban. Not satisfied with the impact of the ban on Huawei, the U.S now has a way to make the ban stiffer. The new states that the Chinese manufacturer can not do business with any company that uses American technology. The target for this ban is TSMC. The Taiwanese chipmaker is the most advanced in the world and it uses a lot of U.S tech. TSMC has been in charge of Huawei’s Kirin chips. If TSMC can no longer take Huawei’s orders as a result of the ban, Huawei needs to look for alternatives. There are not much alternatives in the Industry, certainly not at TSMC’s level.

Next All iPhone 12 5G Models To Come With OLED Displays