Last month, we published a report claiming that Samsung is working on another Galaxy S20 variant dubbed Galaxy S20 Fan Edition. The new device is supposed to take over or replace the Galaxy S Lite lineup. Earlier this year, Samsung introduced Lite version of its flagship S and Note devices. The ideology behind the new move was to bring flagship-grade experience to the masses. Well, since then we have heard a bit more about the device. It has now made its way to the GeekBench for benchmarking purposes. 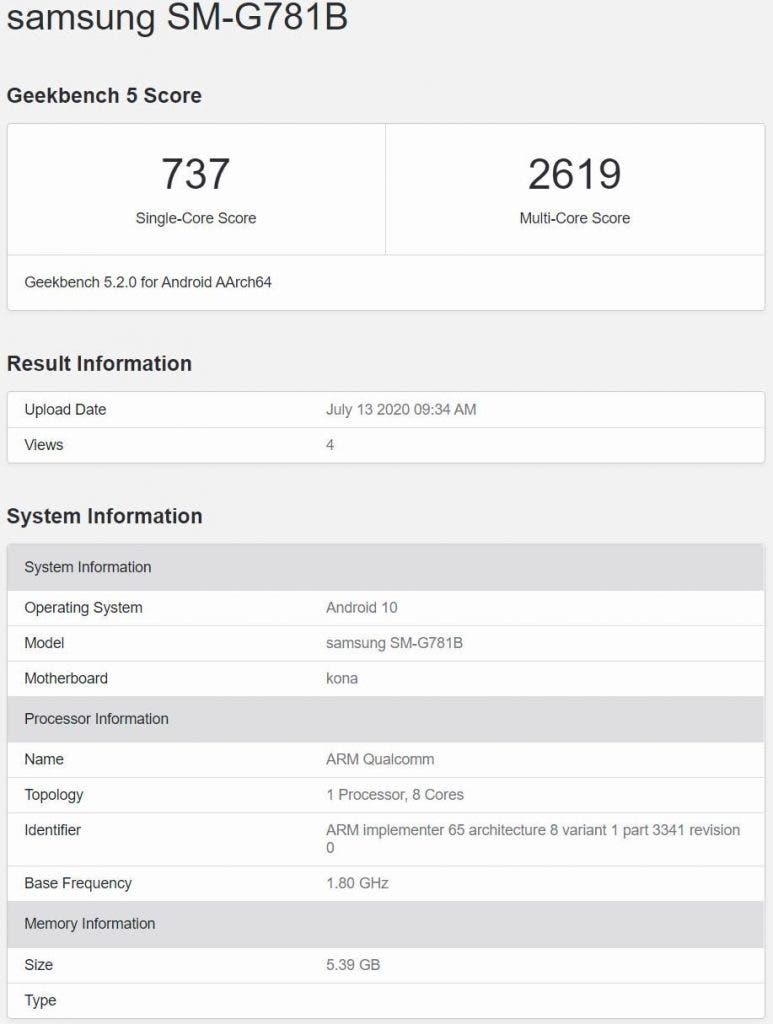 Although we still don’t have any official confirmation on the new moniker shift, Samsung is currently referring to the device as Galaxy S20 Fan Edition. With that said, it will come in two model numbers namely SM-G780 and SM-G781. The former is for the global variant while the latter is for the US only. As per the listing, we will see the flagship Snapdragon 865 chipset which is not that surprising. Well, the S20 Lite or Fan Edition is supposed to be a watered-down version. Furthermore, we previously saw the S10 Lite with the then flagship chipset as well.

The device appears on the listing with 6GB RAM and of course, the latest Android 10 operating system. Taking about the scores, it managed to receive 737 points in single-core performance and 2619 in the multi-core test. As expected, the listing doesn’t talk about anything else. With that said, we might see some more information in the coming weeks.

In terms of pricing, we’re expecting the brand to follow the previous ideology of offering flagship-grade experience at a not-so-premium tag. To recall, the Galaxy S10 Lite starts with $449.99 price tag meaning we might see the S20 Fan Edition at the similar price ranger. It is worth noting that these are all speculations and we should wait for more solid information to surface on the web.

When can we expect the device?

That’s the foremost question and well, we’re pretty unclear about it. Although some reports suggest an October launch, there is still no concrete evidence so far. With that said, Samsung already has a plethora of devices in its pipeline. We’re looking at Galaxy Note 20 duo, Galaxy Tab S7 series, Galaxy Fold 2, Galaxy Z Flip 5G, Galaxy Watch 3 and next-gen Galaxy Buds Live. We might see more reports flooding after the much-awaited Galaxy Unpacked event.