According to recent reports, Finnish company, HMD Global, will soon release the Nokia 2.4 smartphone. This smartphone will be the successor to Nokia 2.3 which has the codename “Wolverine”. The report claims that this device will use an eight-core MediaTek Helio P22 Processor. As of now, the exact launch date for this smartphone is still under wraps. Recently, a new Nokia device with the codename “Wolverine” also appeared on GeekBench. Many believe that this device is the upcoming Nokia 2.4. 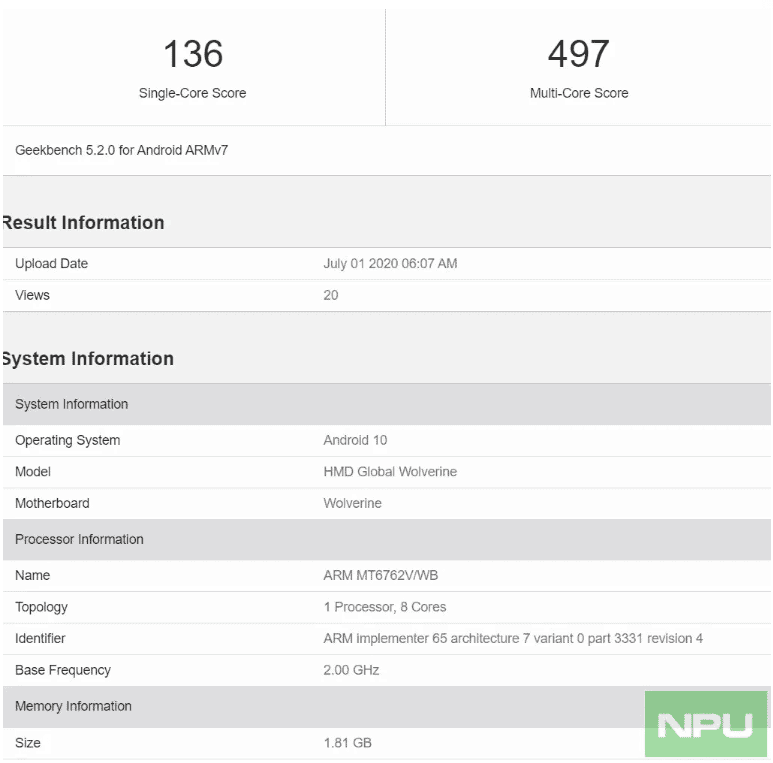 Looking at the Geekbench listing, the processor of this device is ARM MT6762V/WB, which is the Helio P22 processor. Relative to the quad-core Helio A22 processor on Nokia 2.3, the octa-core Helio P22 processor is 1.97 times faster. According to the listing, this smartphone will arrive with only 2GB of RAM. As for its internal storage, there is no information for now. Nevertheless, with 2GB of RAM, the storage should be 16GB or 32GB. This is an entry-level smartphone and its GeekBench single-core test hit 136 points while the multi-core test score is 497 points. With its appearance on GeekBench, this smartphone will probably arrive soon.

With Nokia 2.4, HMD is trying to bring more processing power to its entry-level high-end series. HMD recently launched the Nokia CX series in the United States. This is one of the cheapest series of Nokia smartphones. With the upcoming Nokia 2.4, more details of the aircraft are expected to surface.

In other news, Nokia recently announced the launch of a new generation of data center network operating system (NOS). In addition, the company released a new intent-based network automation and operations toolkit. This will redefine the data center network architecture.

Nokia FSP provides a set of tools that cloud service providers need to implement network operations based on network intent and strategy. FSP goes far beyond the node-centric management system. It is designed to build, deploy, and supervise the entire data center network based on a powerful network-level architecture.