Nubia’s President has officially teased the next iteration of Red Magic smartphone. It is expected to carry the Red Magic 5s moniker and come equipped with the recently announced Snapdragon 865+ SoC.

President Ni Fei took to Weibo to post the official teaser of the Red Magic 5s. The poster is accompanied by a caption – “Beyond Plus” with a #RedMagic5s. This confirms the Red Magic 5s naming. And the Plus is a clue that it could sport the Snapdragon 865+ 5G SoC.

After a lot of rumours, Qualcomm announced the incremental upgrade SoC recently. It brought a 10% overall boost in CPU (max. Clock speed- 3.1GHz) and GPU compared to the older Snapdragon 865. Companies like Asus, Lenovo have already started teasing smartphones with the SoC and Nubia, which is known for quick adaption of the flagship chipsets is sure to hop on the train soon. 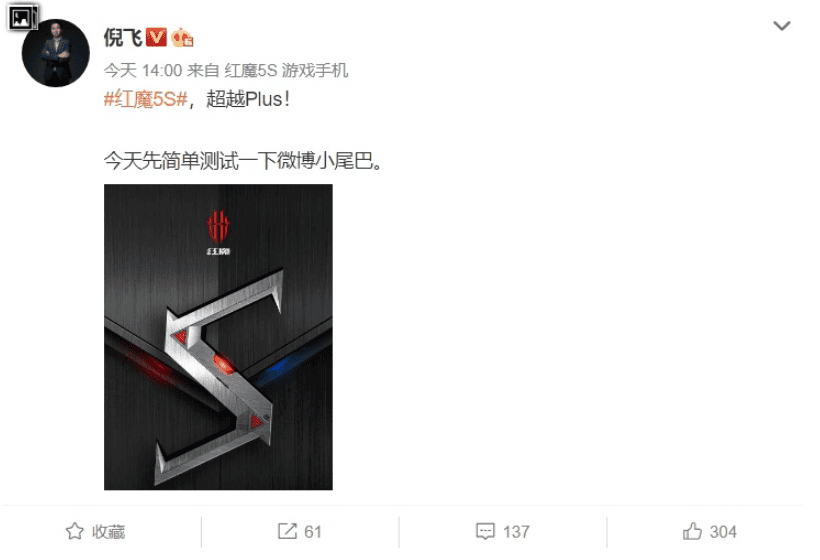 The company was one of the first to launch the gaming-centric Red Magic 3 smartphone with Snapdragon 855 SoC. It followed up as soon as 855+ SoC launched, with the Red Magic 3s last year. It had the gaming accents with Red and Black theme, and across line representing an X flowing along with the rear panel.

This year the company seems to follow the same trend as the Red Magic 5s 5G will slot in above the Red Magic 5 5G that debuted a few months back. Though specifications of 5s are not known yet, we can expect it to share similar internals with the Red Magic 5 apart from the upgraded SoC but we will have to wait further to affirm it.

Red Magic 5s: What to expect?

Fei also shared a teaser poster in the Weibo post. The poster has Nubia’s unique accented background with a big ‘S’ letter indicating the naming of the handset. Further, Fei has shared this post via the phone itself as the Weibo Tag clearly shows he has posted it via the Red Magic 5s and this makes us believe that a launch could very soon in near future.

Regarding the specifications, as said earlier, it is sure to host the Qualcomm Snapdragon 865+ 5G SoC. It could retain the air-trigger buttons on the sides like the Red Magic 5, sport a larger battery, AMOLED display with high refresh-rate, 5G support for faster connectivity, LPDDR5 RAM and UFS for faster storage.

Previous OnePlus Nord: the brand unveils its complete design before the time

Next OnePlus Nord is up for pre-orders in several countries