According to AFP news agency, US Secretary of State, Mike Pompeo, said that the U.S. will impose sanctions on some Huawei employees. He also declared that Washington will announce when to implement new visa restrictions on technology companies like Huawei. The visa restriction will most likely apply to Huawei’s top officials and top technical staff. The U.S. clampdown on Huawei is obviously intensifying. Due to pressures from the U.S., the British government recently banned Huawei. 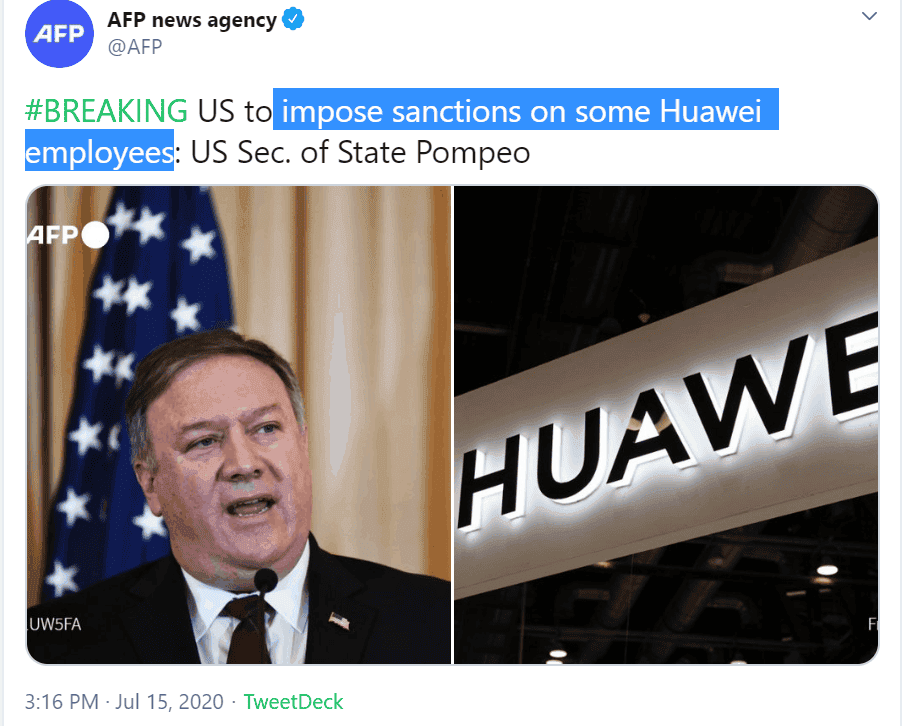 In the face of all these bans, the Chinese manufacturer remains optimistic. Since the beginning of last year, there have been a couple of bans on Huawei by the U.S. However, Huawei’s overall smartphone sales are still booming. In 2019, Huawei smartphone sales hit 240 million units, a new record high. Furthermore, in April 2020, Huawei toppled Samsung to become the top smartphone brand in the world.

In May, Huawei retained its position as the top smartphone brand globally. However, the percentage difference between Huawei and second-place Samsung is only 0.1%. This sparks speculations that Samsung takes back its top position in June. Nevertheless, a recent report from Nikkei Asia, Huawei will likely retain its top position in June. The report claims that in the global smartphone market from April to June, Samsung Electronics is likely to give up the throne to Huawei. Not satisfied with the impact of the previous ban on Huawei, the U.S needed to make the ban stiffer.

The U.S. extends its ban on Huawei

The U.S. Department of Commerce issued a statement in May saying that it was amending an export rule that is “strategically and strictly aimed at Huawei’s procurement of chips”, prohibiting foreign semiconductor manufacturers that use U.S. software and technology without permission from U.S. officials from providing products to Huawei under certain circumstances.  The new regulations will have a 120-day grace period, and thereafter, any chips sent to Huawei or its affiliates will require a license. This measure may give the US Department of Commerce the ability to prevent TSMC from supplying Huawei.

TSMC has been in charge of Huawei’s Kirin chips. If TSMC can no longer take Huawei’s orders as a result of the ban, Huawei needs to look for alternatives. There are not many alternatives in the Industry, certainly not at TSMC’s level. Furthermore, there are pressures on TSMC to reduce the order it takes from Huawei. Nevertheless, Huawei is very important to TSMC, it is its second-largest customer behind only Apple. TSMC has since written to the American government to allow it continue to supply Huawei after the grace period.