According to a recent Canalys report, due to the coronavirus pandemic, the Indian smartphone market fell by 48% year-on-year. This is a new record for India – the market’s largest single-quarter decline in a decade. Furthermore, in Q2 2020, Chinese brands take up about 80% market share in India. In addition, Chinese smartphone brands also occupy three slots in the top four rankings. Xiaomi, Vivo, and Oppo ranks first, second, and fourth respectively. 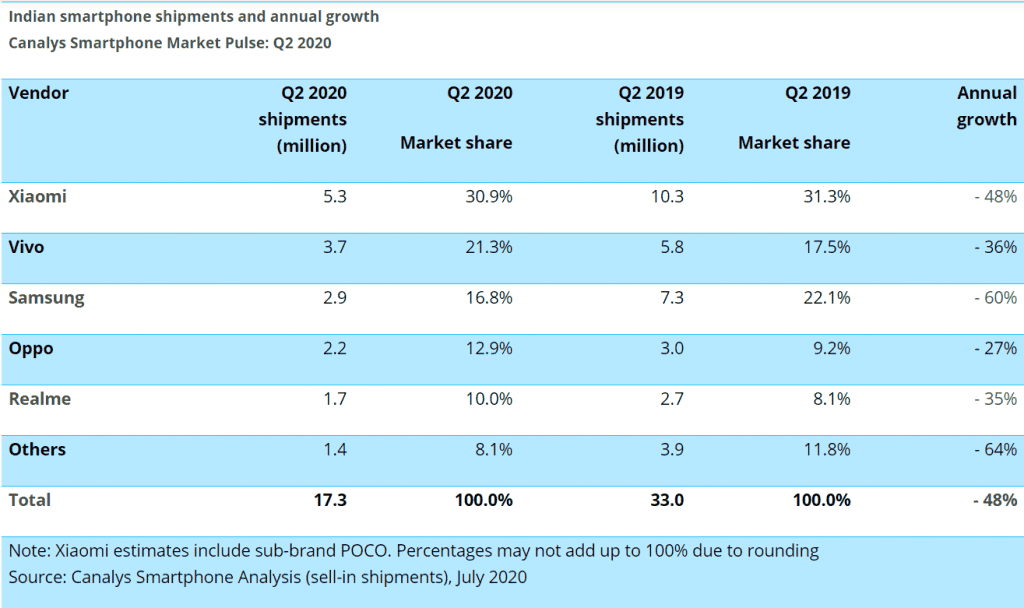 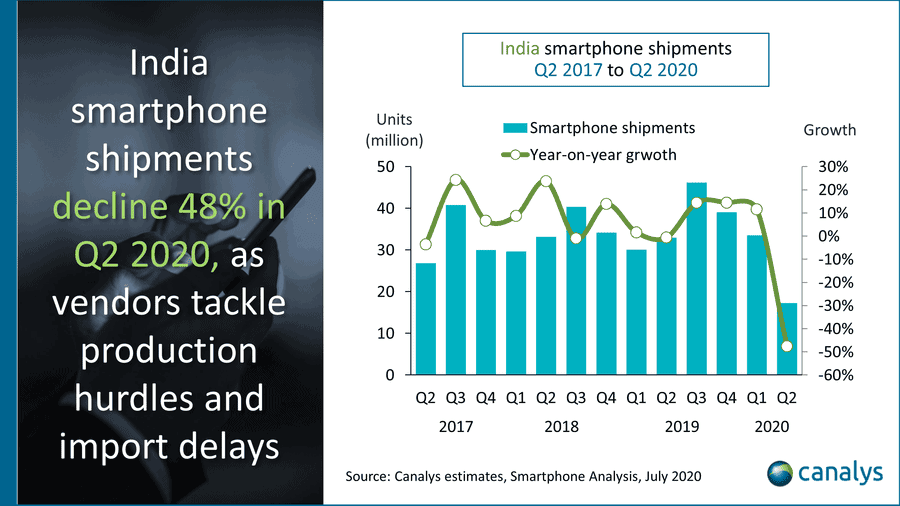 In order to curb the spread of the virus, India ordered a nationwide lockdown at the end of March. This requires all stores across the country to temporarily suspend operations except for some stores selling groceries and medicines. Even e-commerce giants such as Amazon and Flipkart have been banned from selling smartphones and other products. These products are classified as “non-essential” by the government.

The long-term lockdown lasted until mid-May. After that, the Indian government ordered the resumption of delivery services of other stores and e-commerce items. Looking at the strictness of the Indian lockdown, we can understand why the smartphone market in India has declined so severely in the second quarter.

In the second quarter, Vivo, another Chinese smartphone brand, shipped 3.7 million units in India. It holds a 21.3% market share of Indian smartphones and ranks second behind only Xiaomi.

South Korea’s Samsung Electronics ranks third with a 16.8% market share in the second quarter. However, Samsung Electronics has been expanding the Indian market, and in recent months the company has invested heavily in India. In the second quarter, Oppo ranked fourth in the sales ranking. Chinese companies such as Xiaomi, Vivo, and Oppo own nearly 80% of the Indian smartphone market.

Recently, due to the Sino-Indian border conflict, the Indian market has appeared to boycott Chinese products. However, Canalys believes that Chinese smartphone brands will be able to avoid this sentiment to a large extent. This is because “the alternative products from Samsung, Nokia, or Apple have almost no price competitiveness.”

Canalys said that Apple only owns 1% of the Indian smartphone market. Also, the company is the least affected by the pandemic among the top 10 smartphone sellers in India. According to the research company, Apple’s iPhone shipments in the second quarter of 2020 were 250,000 units, a decline of only 20% year-on-year.

Previous Xiaomi's upcoming flagship may use a full ceramic body