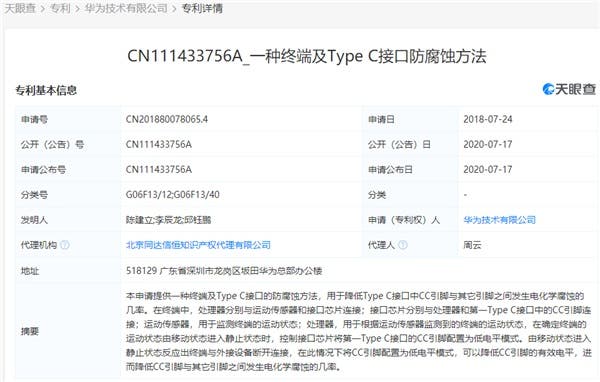 The patent abstract shows that the solution from Huawei provides an anti-corrosion method for the terminals and Type C interface. This method is used to reduce the probability of electrochemical corrosion between the CC pin and other pins in the Type C interface.

If the motion sensor detects a motion – static movement, it reflects that the terminal is disconnected from the external device. In this case, configuring the CC pin to low-level mode can reduce the effective level of the CC pin. This in turn reduces the chance of galvanic corrosion between the CC pin and the other pins.

From the above summary, the motion sensor plays an important role, which can detect whether the terminal is disconnected from the external device. Of course, this is only a patent. Just like millions of other patents, this one may never hit the road. It is impossible to determine whether or when it will go commercial.