The smartphone market in China has decreased heavily in the second quarter of this year compared to the same period last year. According to analysts at Counterpoint Technology Market Research, the drop was 17%. The reasons for this phenomenon are known to everyone – coronavirus and quarantine measures. However, this has not stopped Huawei from further expanding its presence in the home market.

Huawei controls almost half of the Chinese smartphone market

While the joint share of Huawei and Honor in the global market is declining, in China they manage to control almost half of the smartphone market – 46%. In other words, almost one of every two mobile phones sold in the second quarter of this year had the Huawei or Honor logo. Sales of 5G smartphones are particularly strong, accounting for 60% of all devices sold by companies. 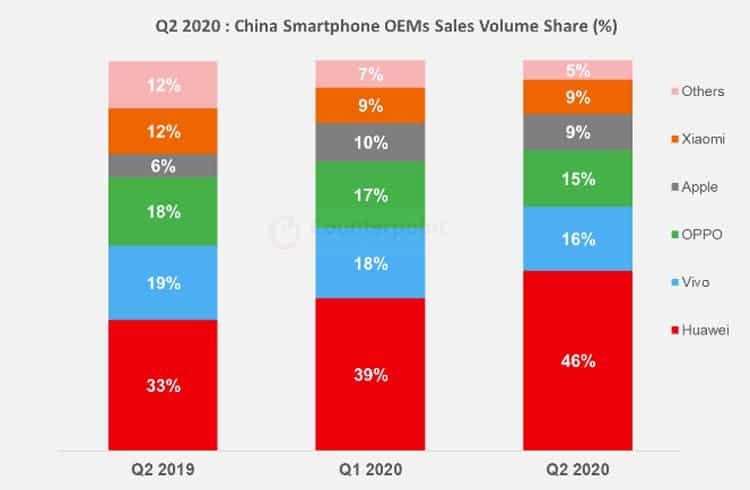 In second place was Vivo, whose share in the Chinese market was 16%, which is 3% less than a year earlier. Oppo closes the top three, sales of which also decreased by 3% and its share is 16%. Interestingly, in fourth place was Apple, which, despite the coronavirus pandemic and production problems, was able to strengthen its position in the Chinese market – 9% against 6% a year earlier.

Xiaomi also managed to break into the top 5, which demonstrates stability this year – 9% in the first and second quarters of this year. But compared to the second quarter of last year, the company has lost its share, and it decreased by 3%. 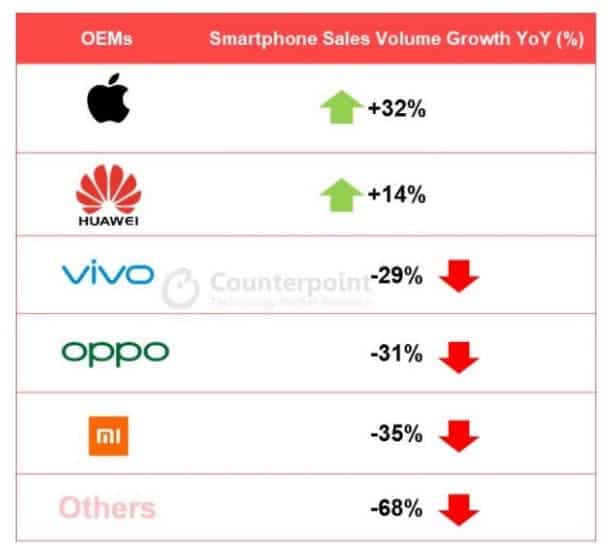 CINNO Research also published its report on the state of affairs in the Chinese smartphone market for the second quarter. According to it, the picture looks even more depressing – the overall drop was 24.7%. But in terms of the market share, their information is consonant with the conclusions of Counterpoint, but the shares of the companies are still different.

“Despite a slowdown in the smartphone market in China. Chinese OEMs have picked up the pace in 5G developments that were hampered by COVID-19 disruptions in Q1 2020. In Q2, 33% of smartphones sold were 5G enabled compared to just 16% in Q1. The proportion was even higher in June, where more than 40% of smartphones sold were 5G capable. China’s 5G smartphone market is quite consolidated with HOVX grabbing 96% of the market. Huawei leads in 5G smartphone sales accounting for 60% of the market, followed by Vivo, OPPO, and Xiaomi. 5G smartphones in China are still priced in the mid-to-high price range of USD$400 and above. However, 5G smartphone prices are quickly moving towards lower-tier price bands. High-end 5G smartphones are predominantly from Huawei, while Huawei, OPPO, Xiaomi, and Vivo all have various offerings in the mid-tier.”

Previous Samsung has started working on One UI 3.0 based on Android 11