Samsung will unveil its new Galaxy Note smartphones on August 5 in the form of Galaxy Note 20 and Galaxy Note 20 Ultra. We’ve been seeing extensive leaks revealing every aspect of this handset and even renders popped out. So far, we’ve only seen the Galaxy Note 20 Ultra in two distinct colors – Mystic Bronze and Mystic Black. Now, a third color option has just popped out, this one is being called Mystic White (via 91Mobiles).

The Note 20 Ultra is the real king of Note series

The new Galaxy Note 20 Ultra will go official on August 5 during Samsung’s online-only Unpacked event. Samsung, unfortunately, didn’t confirm the arrival of the Note 20 Ultra, but we already know that it will come thanks to a myriad of leaks. According to recent reports, the phone will ship with an Exynos 990 SoC in Europe. Really disappointing news for all those who were expecting the Snapdragon 865+ variant coming for distinct markets like the US and probably China. The phone ships with Android 10 straight out the box and might introduced One UI 2.5 skin. Moreover, it will have 12GB RAM and up to 512GB of Storage. 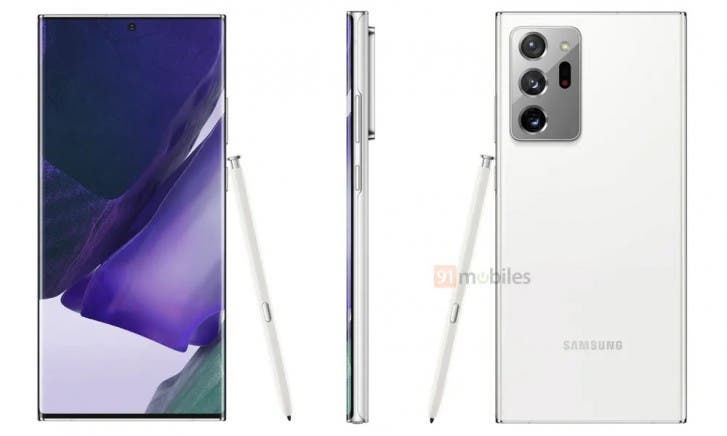 The smartphone flaunts a 6.9-inch WQHD+ AMOLED display with curved edges and a 120Hz refresh rate. There is a punch-hole in the center for the 10MP selfie shooter. Around the back, we have the 108MP camera coupled with a 12MP ultrawide and 12MP telephoto units. The phone will include a Laser Auto-Focus in a bid to fix all the issues found on its S20 Ultra sibling.

Apparently, the phone will come in the three aforementioned colors. The Mystic Bronze has been the hero color of the Samsung Galaxy Unpacked event so far as other devices like the Z Fold 2, the TWS Galaxy Buds Live, and Galaxy Watch 3 are also coming with this color option.

Read Also:  Samsung Has No Decision To Return To Russia
Source/VIA :
91Mobiles

Next Huawei Talkband B6 coming in four color variants