Chinese manufacturing giant, Xiaomi, has been doing quite well in the smartphone market. The company is among the top five phone manufacturers globally. In India (the world’s second-largest smartphone market), it has the largest market share for about two years. Its strategy of launching cost-effective devices seems to be working very well for the company. With the release of the Mediatek Dimensity 5G chip series, Xiaomi has been a huge fan. A couple of Xiaomi and Redmi 5G phones already use Dimensity chips and more will probably use this chip. 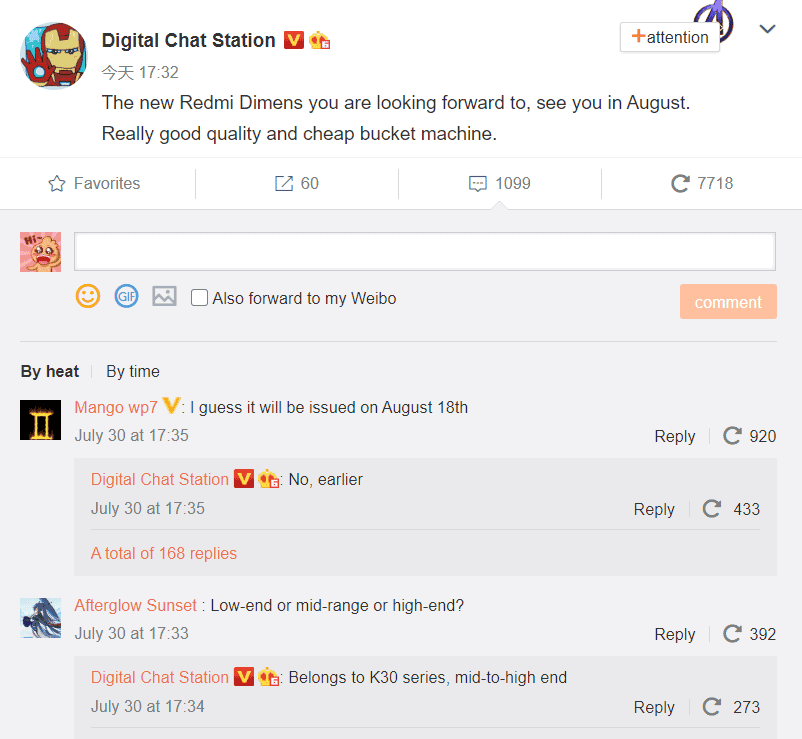 Recently, Huawei, Xiaomi, and Oppo adopted the Dimensity 720 5G SoC. MediaTek claims that we will see smartphones with this chip before the year runs out. According to popular Weibo leakster (@数码闲聊站), Redmi will launch a new Dimensity phone in August. His message claims that the smartphone will be very cost-effective. He also said that it will be a real high-quality inexpensive smartphone.

Furthermore, Xiaomi fans want to know if this device belongs to the low-end, mid-end, and high-end segments? The leakster’s reply shows that this smartphone belongs to the Redmi K30 series. This series is a mid-high end segment.

There have been a lot of speculations regarding an upcoming Redmi K30 Ultra. Could this launch period belong to the K30 Ultra? We can not confirm this as of now.

Recall that XDA Developers already spotted a “Redmi K30 Ultra” in the internal code of MIUI 12. This smartphone comes with the codename “cezanne”. It uses a quad-rear camera setup with a 64MP main camera. Also, this smartphone uses a MediaTek processor as well as a pop-up camera solution. However, the report does not say which MediaTek chip this smartphone will use.

According to recent information, the Redmi K30 Ultra will come with the MediaTek Dimensity 1000+ processor. This smartphone will also use a pop-up design as well as an OLED display. Following the recent trends, this device will come with a 120Hz display. Recently, Xiaomi has been teasing the Xiaomi Mi 10 Super Cup and it is expected to arrive in early August. It seems that this new Redmi K30 will be released together with the Super Cup.

Previous Vivo S7: key specifications surface ahead of the launch