A few days ago an unreleased Vivo smartphone dubbed Vivo X60s has made a way through the GeekBench database as Vivo 2006. The benchmark served to give us some interesting details about the phone’s key specifications. The device also appeared on Bluetooth SIG with the very same model number V2006. The Vivo X60s 5G has once again been certified, this, however, by the Danish agency UL Demko. The device appeared bearing two previously seen model numbers, Vivo 2006 and B2006. Unfortunately, the certification page doesn’t bring many details about the smartphone. However, it is enough to confirm the presence of a 33W fast-charging technology.

Interestingly enough, the certification comes just a few weeks after the company unveiled the Vivo X50 series. It brought some interesting phones like the vanilla X50 and X50 Pro features a unique gimbal-like image stabilization system. The company also unveiled a Vivo X50 Pro Plus featuring a Snapdragon 855, but without the Pro camera prowess. It may be too soon for a Vivo X60s, but this is not preventing Vivo from acquiring the necessary certifications for releasing it. 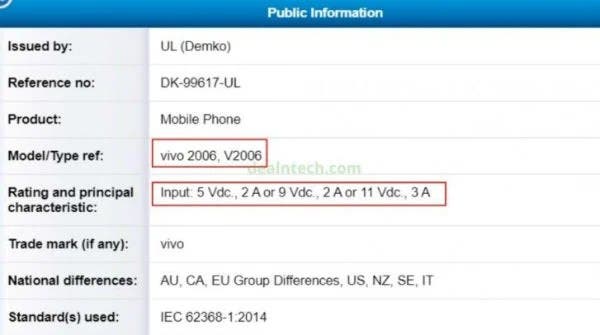 Unfortunately, we still have missing details about this handset including its design and a launch window for it. It’s unlikely that Vivo will announce the new handset in India with 5G one time that it has just released the X50 series. Moreover, a new Vivo S7 5G is coming as the thinnest 5G smartphone in the market. It does not seem like the perfect for a Vivo X60s unless the company wants to compete with itself.

Another smartphone with the Snapdragon 765G

On the GeekBench listing, the handset achieved 637 points in the Single-core tests and 1,985 in Multi-Core tasks which is pretty on par with results achieved by the Snapdragon 765G chipset. Yeah, the device will come with the SD765G. We already can count several smartphones from Vivo shipping with Qualcomm’s 5G SD7xx chipset.

Considering that Vivo will unveil the Vivo S7 5G soon in China. We expect to see the Vivo X60s towards September, unless that the company indeed aims to flood the market with similar smartphone offerings. Worth noting that the device still needs to appear on TENAA. Only then we’ll have sure about its design and the company’s intentions of releasing it on its domestic market. Of course, the company could skip China and instead focus on Global markets where 5G networks are operating.