Just like other Galaxy flagship devices, the upcoming Galaxy Note 20 will arrive in two chipset variants – Snapdragon 865+ and Exynos 990 SoC. Earlier, we were expecting Samsung to go with Snapdragon only version, but it turns out it is still sticking with its in-house line of chipsets. Well, an Exynos variant of Note 20 Ultra has now appeared on GeekBench listing. As expected, there’s no surprise looking at the scores, but some of you might be disappointed. 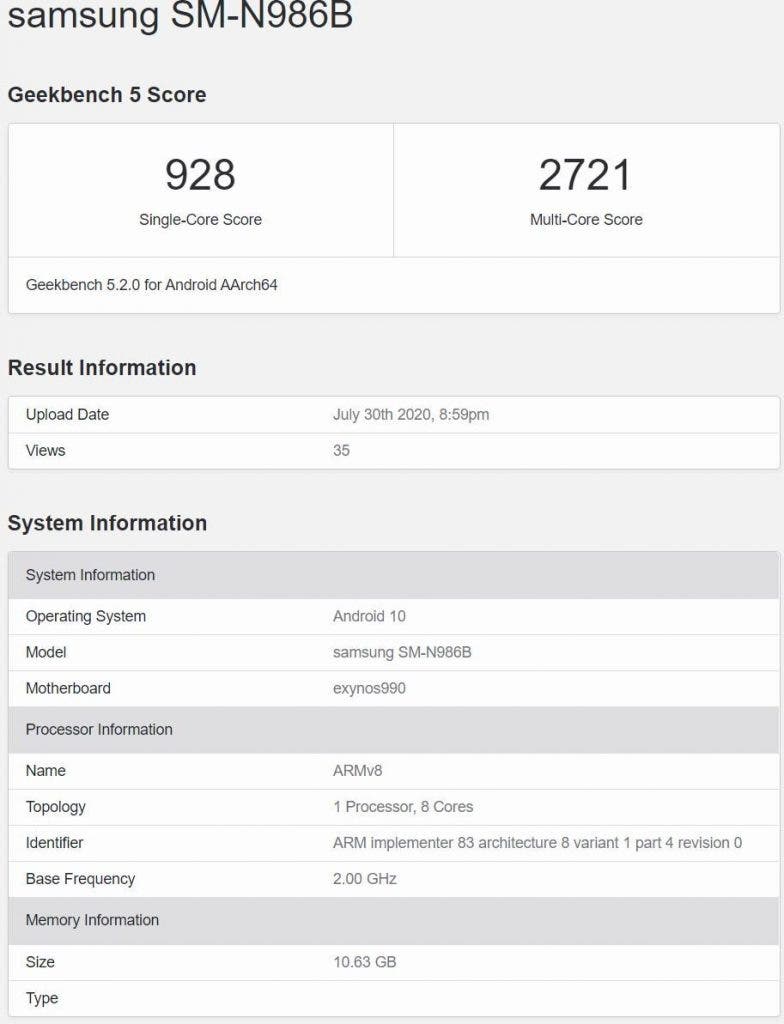 In the GeekBench listing, Galaxy Note 20 Ultra surfaced with 10GB RAM, Exynos 990 SoC, and Android 10 operating system. Coming to the scores, it managed to score 928 single-core performance and 2721 in the multi-core test. It is already known that the Galaxy S20 series with Exynos 990 chipset in most markets is inferior to its Snapdragon counterparts. This performance gap ended up giving a huge backlash to the brand. Galaxy fans ended up signing a petition asking Samsung to not use Exynos on its flagship lineup.

To fix this, Samsung is currently planning to use an improved version of Exynos 990 on its Note 20 series, if the recent rumor is to be believed. According to the rumor, the improved Exynos has better thermals than the SD865+ chipset.

Well, the first benchmark listing doesn’t seem to agree on that. It makes sense considering there is no way we can see whether the main issues are fixed or not. For those who’re unaware, the issues we’re looking at are heating, GPU throttling, higher power consumption in performance mode.

same performance levels to that of S20!

The scores do show that the performance levels of Note 20 lineup is similar to that of Galaxy S20. The performance gap will further widen with the brand going with Snapdragon 865+ this time. With that said, it is worth noting that a single benchmark score can not paint the entire picture. Whether the device will have improved chipset 0r not, only time will tell.

Considering all the backlash the brand faced, Samsung should have a solid reason for sticking with Exynos chipsets for its Note 20 lineup. For those who’re unaware, Samsung will launch the Galaxy Note 20 lineup at its upcoming Galaxy Unpacked 2020 event. The conference will happen on August 5. Alongside Note 20, we will see Galaxy Tab S7 series, Galaxy Z Fold 2, Galaxy Watch 3, and Galaxy Buds Live.

Next Huawei tops the global smartphone market for Q2 2020 - IDC