After many rumors, speculations, and reports, the Global variant of the Oppo Reno 4 Pro is finally here. It does not seem like a big deal in comparison to the Chinese Oppo Reno 4 Pro since the new variant ditches the better Snapdragon 765G for a 4G-only Snapdragon 720G. However, there are incremental features that make this phone stand against like the competition like its 65W fast-charging system which is unique in this range.

The Reno 4 Pro Global variant has a 6.5-inch Super AMOLED display with FHD+ resolution and 90Hz refresh rate. Moreover, this panel offers a 180Hz touch sampling rate meaning that it is very responsive for games and quite bright with a peak brightness of 1,100 nits. The panel also hides a fingerprint scanner and has the necessary Widevine certification for running 1080p videos from Netflix. The panel also features curves that effectively make it look like a bezel-less smartphone. It in fact has a 92% screen to bot ratio. The phone weighs just 161g and is 7.7mm thick. On the top left part of this display, we have a punch-hole housing a single 32MP selfie snapper that supports Night Mode. 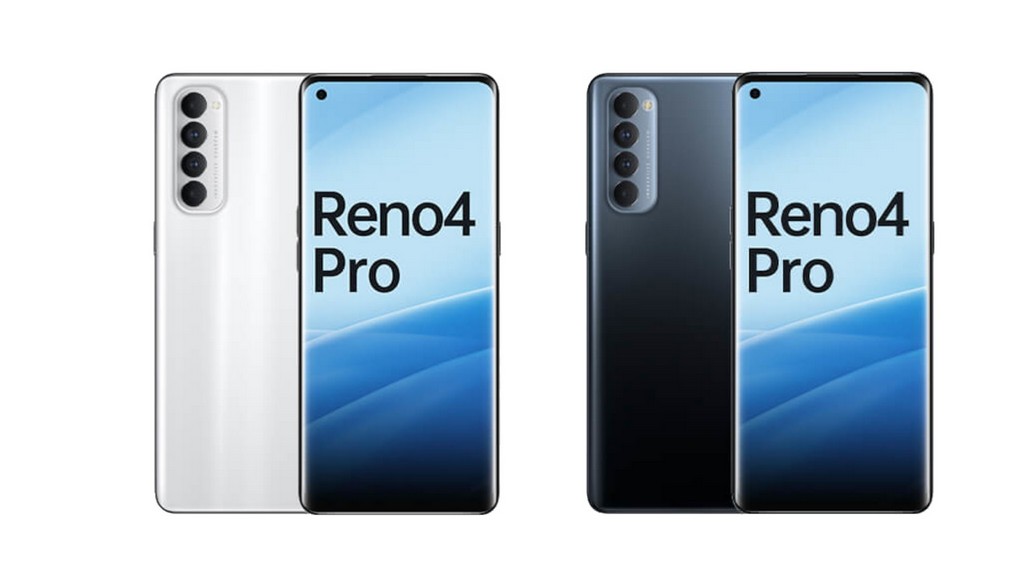 Moving around to the back, we have a Quad Camera setup sitting on a rectangular shape. Interestingly enough, the camera array is quite different from the one offered by the Chinese version. The phone ships with a main 48MP camera from Sony with Nigh Mode support and Electronic Video Stabilization. We also have an 8MP Ultra-Wide camera and a 2MP macro shooter. Worth noting that the fourth and final sensor is a 2MP Monochromatic Sensor. Oppo has removed the telephoto camera that was found in the Chinese version.

Under the hood, the phone ships with the aforementioned Snapdragon 720G SoC. It’s a power-efficient processor, but unlike its Snapdragon 765G sibling lacks any kind of 5G connectivity. Oppo is aware that this chip is weaker than the Chinese variant, so it is comparing it with the Helio P95 found on the global Reno3 Pro. According to the company, the 8nm Qualcomm chip has a 47% higher single-core performance. Moreover, the GPU is 40% faster than MediaTek’s solution. Despite this, the phone will still be inferior to some Oppo Reno3 Pro units with Snapdragon 765G. However, you get better cameras with the Reno 4 Pro.

Users can pick two distinct variants with either 128GB or 256GB of Internal Storage. The RAM amount is capped at 8GB of RAM which is more than enough for Android apps and games. To keep performance at max, the company is teasing a new cooling system that makes use of a graphite tube, sheet and a copper foil.

The phone comes with a 4,000mAh battery which is more than enough to keep a full day of usage. To make things even better, Oppo paired the phone with an insane SuperVOOC 2.0 system. It provides a 65W charge for the smartphone which allows you to get a full charge in just 36 minutes. According to the Chinese maker, this system is quite safe offering a multi-layer protection setup. The system is monitored all the time and if anything goes wrong, the power is cut immediately

Oppo points out that the system is safe (and TUV certified that it is) with a multi-layer protection setup. Every component – power brick, cable, phone, and even the battery itself – monitors the situation and if anything goes wrong, the power is cut immediately.

The global version of the Oppo Reno 4 Pro will be available in two distinct color options – Starry Night and Silky White. Both options come with a matte finish ensuring that it will not attract fingerprints.

The new handset will reach India on August 5 and will retail for INR 34,990 which is just around €390/$465. The phone will be found on Amazon and Flipkart and both retailers will be giving a gift box to the first 1,000 costumers. Unfortunately, this box’s content has not been detailed. We expect this phone to hit more countries, but the exact list is not available at the moment.

We are curious to see how this smartphone will stand against the OnePlus Nord in India that also arrives next month.

Next ELEPHONE E10 Pro Now on Sale on the Official Website