9to5Google reported that From Quick Settings integration to a new design on the lockscreen, Google’s upcoming Android 11 system has significantly transformed the media playback experience. However, as part of this, Android 11 will stop using lock screen album art photos. 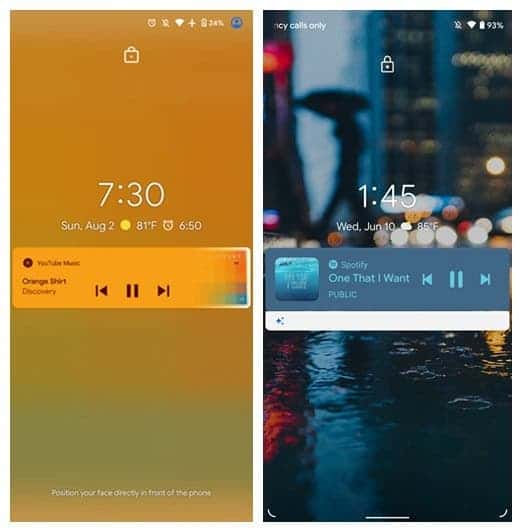 In order to highlight active media playback, Google has long adopted the album art being played and displayed it on the lock screen. In the Android 10 system, the multimedia art cover uses a blur effect.

On Friday, a Googler confirmed in the issue tracker that Google Android 11 will completely get rid of the lockscreen art cover.

This has become the case for users who have enabled the larger ‘media resumption’ to redesign the player controls. However, other users still have the old design. Google considers this to be a bug and h ‘fixed’ in the internal/coming build.

Many users are dissatisfied with this behavior, and the Android team did not give an explanation. One possible reason is that the redesigned notification control shows a non-blurred preview of the artwork. And another reason is that when the ‘skip lock screen’ option is on, most Pixel 4 users will not even see the album artwork. With the increase of biometric unlocking options in the future, this may become the default experience.

As Google is close to finalizing Android 11, this lockscreen art change is likely to appear at a public conference later this quarter.

Agree that lockscreen controls on Android are complex. So Google does its best to make them simpler. With Android 11, though, Google has given lockscreen media controls a facelift. But we should point out that this refers to certain settings.

Android 11 will come with new media controls. Instead of a simple notification, the quick settings shade will also house media controls within. So this will allow you to switch the media output settings between your phone’s speaker and nearby Bluetooth speakers directly from there.

Anyways, when you disable ‘media resumption’ option, Google also redesigns Android’s media controls up on the lockscreen. As a result, the media controls will look bolder and look more like a part of the system.