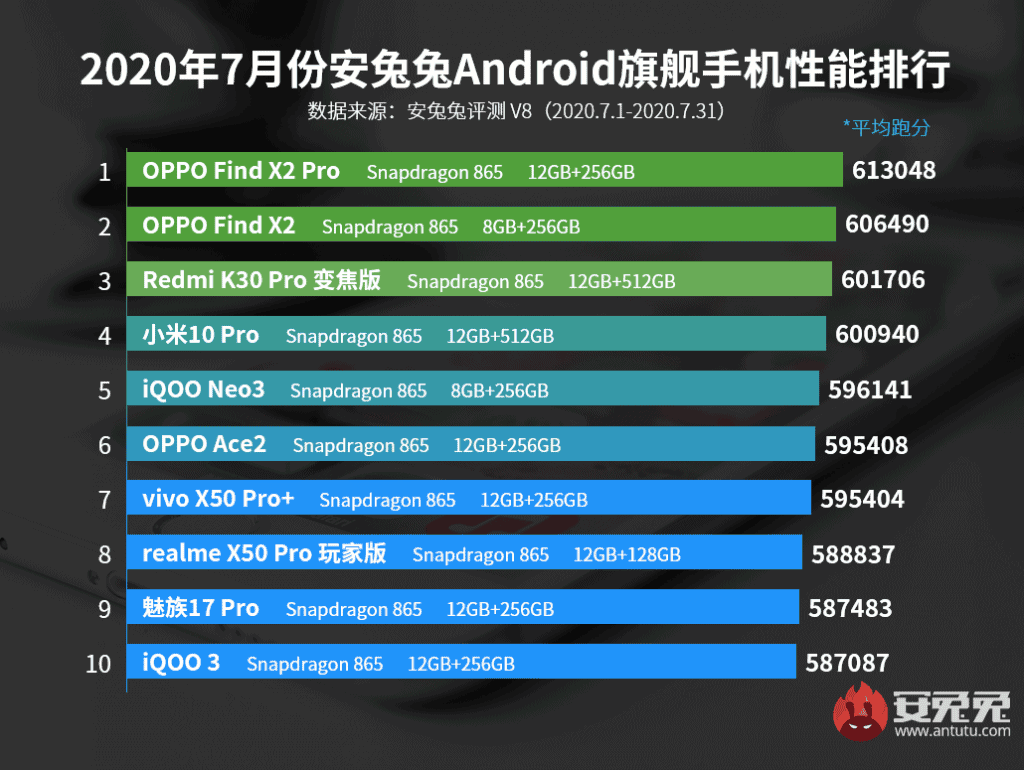 The statistics for July relies on measurements between July 1st to July 31st, 2020. The results in the list are the average scores calculated instead of the highest scores. The statistics of a single model is >1000 and the results are based on AnTuTu V8 version. If a single model has multiple storage capacity versions, the list takes the version with the highest score.

Oppo and Vivo dazzles on the Android flagship smartphones list

On the performance list of Android flagship smartphones in July, Oppo’s results are extremely dazzling. The company did not only claim the top two spots, it also grabbed another two spots if we add its Realme sub-brand. While the Oppo Find X2 Pro and Find X2 are comfortable in 1st and second positions respectively, the Oppo Ace 2 and Realme X50 Pro players Version got 6th and 8th positions respectively. This means that Oppo occupies four slots in the top 10 top-performing Android smartphones for July 2020. This is quite impressive.

Oppo is not the only brand with a blistering performance on this ranking. Vivo also did well if we of course add its iQOO sub-brand. The company occupies three slots with the iQOO Neo 3, Vivo X50 Pro+ as well as the iQOO 3 which is in the tenth position.

The number one model remains Oppo Find X2 Pro just like last months with an average score of 613,048. This phone is redefining Oppo’s performance in the smartphone industry. No doubt, this device comes with strong hardware support that includes the Qualcomm Snapdragon 865 SoC LPDDR5 + UFS 3.0.

With strong hardware support, its 3K 120Hz screen also brings an extraordinary visual experience. So far, it is the best display on the smartphone market. All these as well as Oppo’s software adjustment assistance over the years make the Find X2 Pro desirable. Nevertheless, with the pace of development in the industry, this smartphone may not retain its top spot for long.

In the second position is another Oppo smartphone, Find X2 with an average score of 606,490. Well, it is no surprise that this device is in the second position because its specs are basically the same as its “big brother”. The only difference between this smartphone and the Pro model is in the camera and the memory. The Oppo Find X2 comes with a LPDDR4x. Nevertheless, it still racks up a performance score which is just over 600,000 points. If users think that the Pro version is a bit expensive, choosing the standard version of Find X2 will still be a good choice.

Third, on the list is the Redmi K30 Pro zoom version with an average score of 601,706. Recall that after the independence of Redmi (from Xiaomi) in January 2019, the Redmi brand was supposed to be a mid-range brand. However, with the release of the K30 series, it now has a flagship series that is selling for a mid-range price.

As of last month, the famous model on the Redmi K30 series was the K30 Pro standard version. This time the zoom version is also on the list and achieves a good result. After all, in terms of performance, Redmi K30 Pro has never been weaker. Under the hood, this smartphone comes with the Qualcomm Snapdragon 865 SoC.

In the fourth position is another Xiaomi smartphone, Xiaomi Mi 10 Pro. Released in February 2020, the Mi 10 series is one of Xiaomi’s most influential flagships presently. It also uses the Qualcomm Snapdragon 865 SoC as well as a UFS 3.0 storage. It racks up an average score of 600840 and it may remain in the top 10 list for a few months.

The first smartphone from Vivo is the iQOO Neo 3. This smartphone is occupying the fifth position with an average score of just below 600,000, specifically 596,141. Although it lacks the recently popularized on-screen fingerprint sensor, it is one of the first smartphones to use a 144Hz refresh rate display. Of course, it also comes with the Snapdragon 865 SoC.

Yet another Oppo phone is on the list and this time, it is Ace 2 with an average score of 595,408. This device is the sixth most powerful Android flagship smartphone for July 2020. Like all other smartphones on the list, it comes with a Snapdragon 865 SoC.

This is the second smartphone from Vivo on this list and it has an average score of 595404. It also uses a Snapdragon 865 SoC and it is one of the newest smartphones on this list. This device was released in June 2020. This means that it has been in the market for just two months. This device is in the seventh position.

Yet another smartphone fro Oppo occupying the eighth position with an average score of 588,837. The phone comes with a 6.44-inch touchscreen display with a resolution of 1080 x 2400 pixels. Realme X50 Pro Player Version is powered by an octa-core Qualcomm Snapdragon 865 processor. It comes with 6GB of RAM.

The first Meizu smartphone on the list is the Meizu 17 Pro in the ninth position. This smartphone records an average performance score of 587,483 and also uses the SD865 SoC. We will not get a better smartphone than this from Meizu this year. The company already confirmed that the Meizu 17 series will be its only flagship series for 2020.

Here you have the Top 10 Android flagship smartphones for July 2020. You can see that these models all come with the Snapdragon 865 chip. The difference lies in the high refresh rate, faster flash memory, and software assistance to widen the score gap. We have mentioned many times that a high-performance flagship is not only to make up the current mainstream hardware but also to optimize and adjust it accordingly in order to give full play to its hardware capabilities. In addition to hardware performance, the tuning of the software is the most profound part of the user’s perception, which can affect the inherent concept of a company and brand. We can also see that the top 10 Android flagship smartphones list for July 2020 is dominated by Chinese manufacturers. This tells a lot about the development of smartphones in China.

Previous Mi Browser Pro gets banned in India, what next?