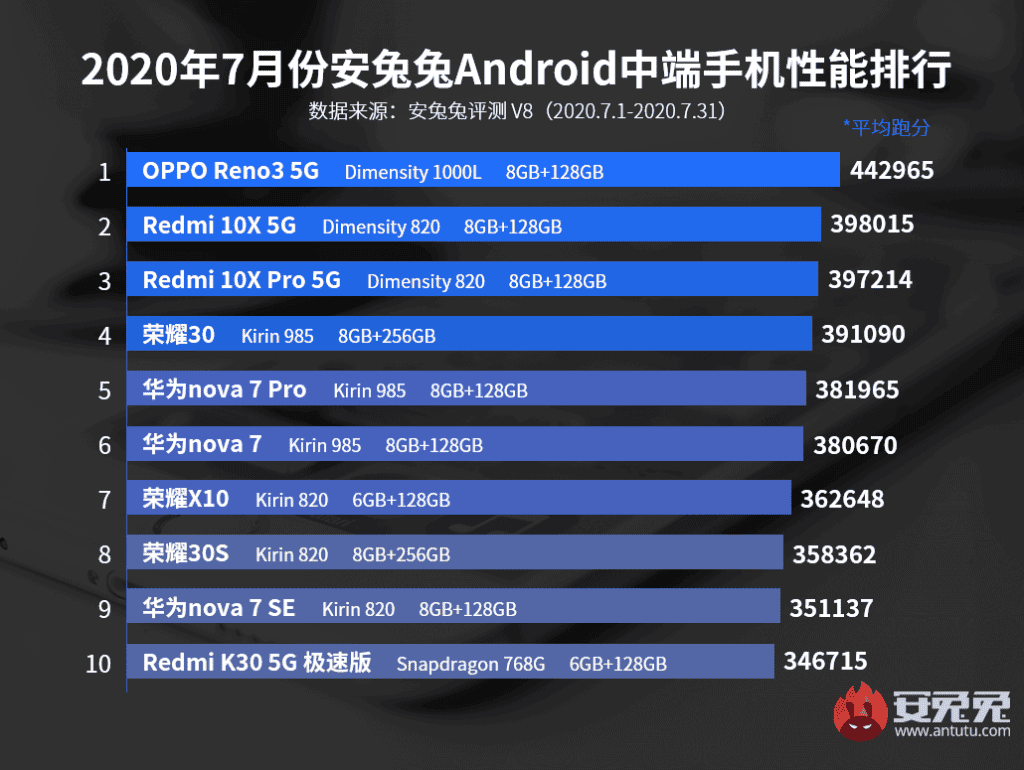 Best mid-range smartphones for July 2020 and their AnTuTu scores

In the flagship segment, we saw the dominance of Snapdragon 865 and Oppo / Vivo. Here, only one Snapdragon chip makes it to the top 10 and it is in the tenth position. There is complete dominance of Dimensity chips which occupies the top three positions. Huawei Kirin chips also dominate with six slots on the list. For smartphone brands, it’s all about Redmi and Huawei. Apart from the Oppo Reno 3 in number one position, the other nine slots are taken by Redmi or Huawei/Honor.

The top three spots on the top 10 mid-range smartphone list is gradually becoming the Reno 3’s birthright. This smartphone has been dominating this segment for many months and it is top again this month. Its average score is 442,965, which is a significant increase relative to the average score of the previous month. This device remains the only smartphone that comes with the Dimensity 1000L. This explains why this smartphone has been top of the mid-range segment. In fact, the Dimensity 1000L SoC is considered as a flagship SoC. Thus, listing the Reno 3 as a mid-range device is a downgrade by the company. No doubt, this smartphone will remain on top of this list for many more months.

The second position is occupied by the Redmi 10X 5G with an average score of 398,015. This smartphone comes with the first 7nm Dimensity 820 chip. Just like the Oppo Reno 3, this series will exclusively use this chip for a couple of months. According to AnTuTu’s measurements, this device easily crosses the 400,000. This makes it one of the strongest mid-range smartphones in the industry for now. Nevertheless, it is still behind the Reno 3’s Dimensity 1000L that still relies on the advantages of A77+G77 to beat Dimensity 820 in terms of CPU and GPU. The latter is mainly UX and storage performance.

The Honor 30, Huawei nova 7 Pro and Huawei nova 7 occupies the fourth, fifth, and sixth spots respectively. These smartphones also have an average score of 391,090, 381965, and 380670 respectively. All three models come with Kirin 985 chip which explains their similar performance. The CPU and GPU scores are basically the same, so the running scores are almost the same. However, the Honor 30 comes with some optimizations that give it an edge over the others.

Looking at the top 10 mid-range smartphones carefully, you will realize that all the smartphones on the list are 5G devices. This shows that 5G SoC in the mid-range market has already been popularized. Also, the price is getting lower but there is still room for cheaper 5G devices to arrive in the smartphone market. As the competition intensifies, chip manufacturers and smartphone brands will reduce their prices. Already, chipmakers are already working on 5G chips for entry-level devices. When this materializes, we will have cheaper 5G phones in the smartphone market.

There is a rapid development in the smartphone market. Specifically, since the advent of 5G, there has been consistent development of cheaper 5G SoC alternatives. Phone makers no longer have to rely on the flagship Snapdragon chips to release 5G smartphones. In fact, flagship 5G chips are quickly losing their relevance. The Mediatek Dmensity lineup is putting up a good fight in the 5G market. It has two new mid-range chips, Dimensity 690 and 720. Presently, these chips are on sale and several manufacturers have adopted them. Already, we have a plethora of low-priced 5G smartphones with these chips. The prices seem to be more friendly, so in the second half of the year, it is worth looking forward to.

Again, Chinese manufacturers dominate the top 10 mid-range smartphones list just like it did the flagship list. Redmi is made for the mid-range market while Huawei (especially Honor) has a good grip on the mid-range market too. Just like we said earlier, the AnTuTu running score should not be the only criterion for choosing a smartphone. The powerful performance is only based on user experience. However, it does not provide feedback on other key factors such as photography, battery life, charging speed, body material/hand feel, etc. Users should comprehensively a smartphone before making the purchase.

Previous Samsung Galaxy A42 appears, could have Snapdragon 690

Next Oppo Reno 4 Pro smartphone has entered the global market