Chinese manufacturer, OnePlus, positioned its self as a flagship smartphone brand. However, this strategy seems not to be enough for the company and it is now shifting grounds. This year, it has already released the OnePlus 8 series which is a flagship lineup. However, last month, the company also unveiled the OnePlus Nord which is its first-ever mid-range smartphone. A recent GeekBench listing now suggests that OnePlus is not done. The company probably has yet another mid-range smartphone for us. 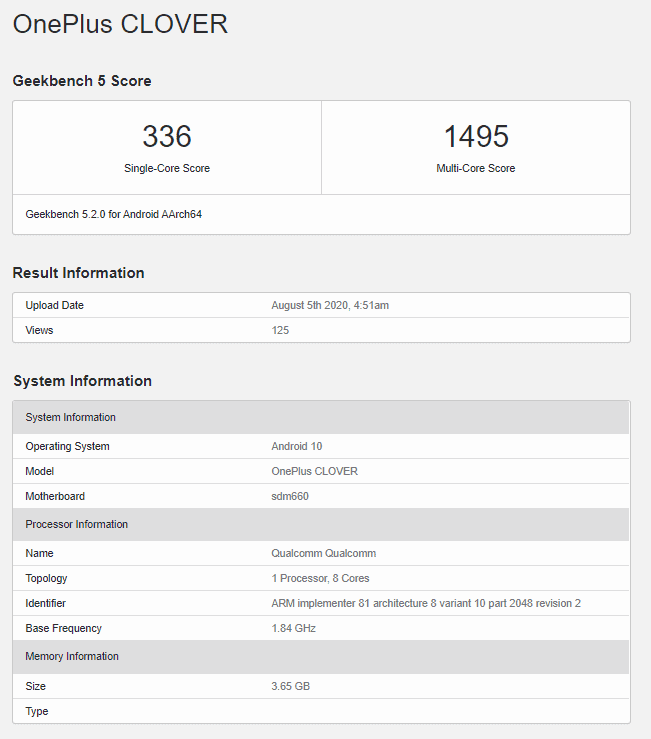 The Qualcomm Snapdragon 660 SoC is a three-year-old processor (May 2017 release) that uses the 14nm process. Obviously, OnePlus is preparing a budget device that it will use to capture the market once again.

Within a month, it launched its first mid-range model, OnePlus Nord, in the Indian and European markets. OnePlus co-founder, Carl Pei, confirmed this week that OnePlus will bring more mid-range models to the North American market. Well-known leakster @Max J. stated that OnePlus is developing two mid-range models internally, called “Billie 1” and “Billie 2”. Previously, a developer found a new machine code-named “Billie” in the code of OxygenOS 10.5. Its chipset is SM6350, and SM6350 which is the code of Snapdragon 690 chipset.

Nevertheless, recent reports show that OnePlus latest smartphones come with Facebook bloatware. Right from the OnePlus 8 series which arrived in April, all OnePlus phones come pre-installed with the Facebook app. Even the latest OnePlus Nord also has this. The problem with this is that users now have to cope with a couple of Facebook-owned apps and a few background services. Annoyingly, there is no simple way to uninstall some of these apps.

The problem with pre-installing Facebook apps is that some of them are running on the background automatically. For starters, they consume users’ data, sometimes very small but they use data. Also, they activate updates that are not from the Play Store. Furthermore, since they use data, we can not tell the sort of information that Facebook is getting. This is not something that any user will love to cope with.

Next This Maybe the Reason Why Trump Bans TikTok and WeChat in the U.S!