Huawei Developer Conference 2020 will hold from September 10th to September 12th. According to Huawei’s official website, it will share the latest developments of HMS Core 5.0 at the conference. It will also unveil the mystery of HarmonyOS and EMUI 11. According to Weibo blogger @长安数码君, Huawei EMUI 11 will be more friendly to cross-applications. Furthermore, he also revealed that the testing of EMUI 11 will commence at the end of September and early October. 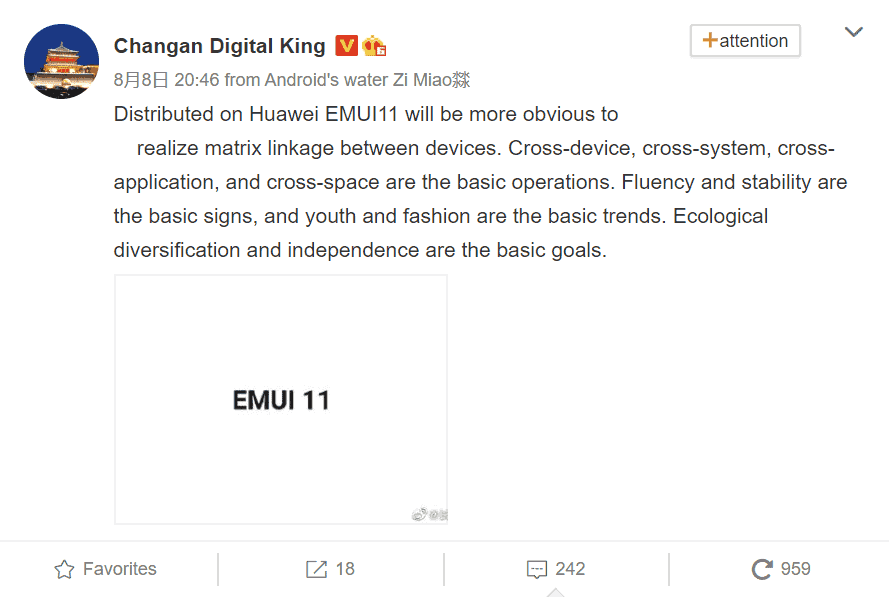 In accordance with previous practices, Huawei EMUI 11 will be built based on the Android 11 open source project (AOSP), with a fully pre-installed HMS ecosystem.

Huawei recently updated the membership center of the Huawei Application Store for Chinese users. The update comes with some information about EMUI 11. In the description, the update adds the phrase “optimizations for EMUI 11 styles”.

There are reports that the EMUI 11 system will be on top of Google’s Android 11 system. The latest Huawei software user interface will come with a large number of new functions. One of the core features is that it will deeply integrate HMS.

This year, Android 11 will still focus on privacy protection, notification optimization, and battery life improvement. It will also focus on a plethora of features that will make the system more fluent.

As of now, Google’s Android 11 is still in testing. The third developer’s preview hit the road some days ago. The first and second developers preview arrived in February and March respectively.

EMUI realizes cross-device service and migration through meta-capabilities, local virtualization of external device services, and natural perceptual interaction between users and devices. It achieves this through a distributed and integrated information perception platform. Thus, the system builds a distributed multi-device collaboration capabilities.

EMUI’s multi-screen collaboration function actually opens up Windows and Android applicability. It eliminates the barriers between different systems and makes mobile phones a peripheral device for each other to achieve complete integration.

Simply put, the “Distributed Technology” can create a “super device” that allows information to flow seamlessly among multiple terminals. It also creates the ability of each terminal to share mutual assistance and peripherals with each other. This will make it feel like these devices are running on the same terminal for applications.