iQOO had previously confirmed its partnership with BMW M Motorsport for the 2020 DMT season. Furthermore, it was revealed that the company will be launching a special BMW edition; of the iQOO 5 series on Aug. 17 alongside the regular iQOO 5. Now, the company rolled out a new teaser that gives us a good look; around the rear of seemingly the iQOO 5 Pro BMW Edition.

The newly arrived poster of the iQOO 5 Pro BMW edition reveals a textured back panel which could be possibly made out of carbon fibre material. Judging by the image, the rear panel seems to have curved edges with blue accents matching the headlights of the BMW car. The image also reveals a triple rear camera module; housed in vertically-aligned camera setup. While the exact arrangements of the three cameras are not known yet; there seems to be a periscope lens with the third camera module. 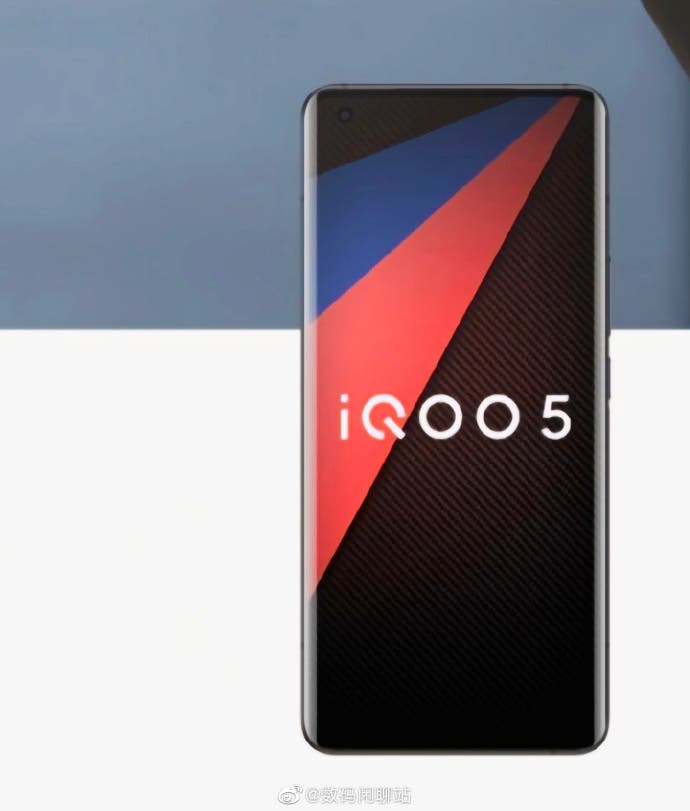 Recently, the iQOO 5 was spotted at Master Lu Benchmark, where the upcoming smartphone will be powered by the 2.84Ghz Octa-core Qualcomm Snapdragon 865 chipset coupled with Adreno 650 GPU onboard. Additional information includes the screen resolution of 1080 × 2376 pixels, 8GB of RAM and 128GB internal storage. The iQOO 5 scored 139,720 points and in the GPU test, and 229,986 in the CPU tests. On the other hand, the device scored 43,734 and 66,963 in the RAM and Storage tests respectively. Combining all the test, the IQOO 5 scored 480,403 in the Master Lu benchmark test.

It is hypothesised that the iQOO 5 series packs in a 6.56-inch AMOLED panel. The base iQOO 5 models may feature a flat display whereas the Pro edition has a curved display. As per recent leaks, The iQOO 5 is expected to arrive with support for 55W fast charging. On the other side, the iQOO 5 Pro will arrive 120W rapid charging technology. The 120W tech is expected to completely charge the iQOO 5 Pro in just 15 minutes.

At the ChinaJoy event, iQOO demonstrated the 120W ultra-fast flash charging technology. The demonstration shows that this charging solution can deliver 50% in 5 minutes for a 4000 mAh battery. According to official information, 120W ultra-fast flash charging uses a 20V/6A input power combination. The iQOO 5 series conference is scheduled to take place on August 17, and more details are expected to surface before then

Next This Would be the World's First Under Display Camera Smartphone! [ZTE Axon 20 5G]