According to a recent patent filing from Huawei, the company has a new foldable phone which is different from what we have seen before. The new patent shows a foldable phone that folds inward. According to reports, the patent was submitted to the China National Intellectual Property Administration (CNIPA) in May 2019. However, the approval for this patent hit the public on August 14 2020. 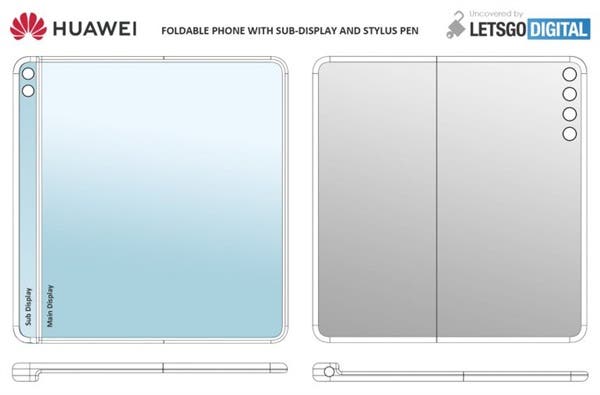 The images show a Huawei foldable phone that folds inward. Nevertheless, there are a number of clear differences with the Galaxy Z Fold2. For example, a cover display seems to be missing. Instead, Huawei again opts for a side bar, which offers space for a double selfie camera and a sub-display.

This side-bar with sub-display is on the left of the flexible screen and remains accessible even after folding. For example, the narrow screen will probably be able to show incoming calls and notifications. Thanks to the narrow sub-display, the implementation of an expensive second screen is unnecessary. However, that is not the only difference from Samsung’s folding phone. Because the side-bar has another function, it is also a stylus compartment. Thus, this Huawei foldable phone comes with a stylus pen. Huawei call this pen “M Pen”.

For a long time there were rumors that the Samsung Galaxy Z Fold2 would arrive with a stylus. However, Samsung seems to have given up on this at the last minute. Will Huawei see a chance to present a foldable smartphone with a pen? Presumably many will regard such a stylus as a real added value.

As with the Mate Xs, the side-bar protrudes slightly in thickness. This is partly due to the stylus compartment and the cameras. If you put the appliance flat on the table, the side bar will be about twice as thick.

Apart from a double front camera, there is also a quad camera on the back. The quadruple camera system is vertically spaced in the top right corner. No buttons or ports are visible in the images.

Whether this is actually the model that Huawei will present around October remains unclear, but is certainly not unlikely. It is not the first time that LetsGoDigital reports on such a type of design. In September last year there was a report on Huawei Mate X2 with stylus pen.

In any case, this Huawei smartphone comes with a special design. Huawei devaites from its design and style and the dieplay also folds inward. The display also has good protection from external forces.