Samsung released the Galaxy Note 20 and Galaxy Note 20 Ultra earlier this month. However, the company isn’t done with the 2020 flagship market as there is a new edition of the Galaxy S20 in development. The company will unveil in the fourth quarter of this year a more affordable version of its Galaxy S20 dubbed Galaxy S20 Fan Edition 5G. The device may be some months away from a release, but this can’t prevent renders from popping out and specs from leaking.

The Galaxy S20 Fan Edition will bring some of the characteristics of the vanilla Galaxy S20. That includes the flat AMOLED display with a centered punch-hole. This choice of design is recurring on Galaxy smartphones, and if you’re not a fan of asymmetrical cutouts then you’ll probably appreciate this choice. Worth noting that the S20 FE doesn’t have the slimmest bezels in the market, but that’s better than most of the mid-range phones out there. The handset reportedly comes with a metal frame feature a chrome-like finish as seen in the images. 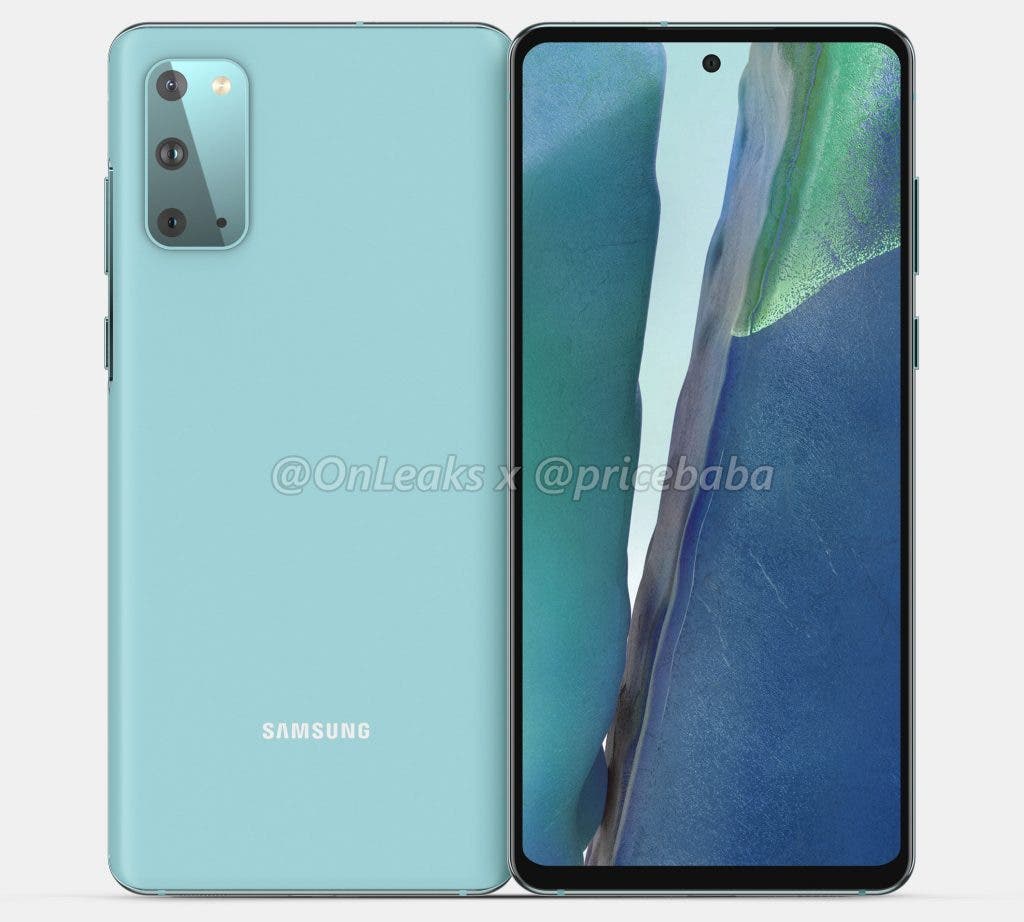 However, we can see were Samsung is cutting corners when we look at the phone’s back. With the Galaxy S20 Fan Edition 5G, the company will go for a plastic back with a matte/frosted finish. The good side is that it won’t be a fingerprint magnet. The leaked render reveals a mint green / light cyan color option. However, this might be just a single colorway and Samsung may be planning several other units.

The phone adopts a square-ish camera island which comprises three rear cameras. The shooters are housed inside of this island along with a LED flash. According to the very reliable Ice Universe, the smartphone will boast a main camera with a 12MP Sony IMX555 sensor. The new device will not come with Samsung’s ISOCELL GN1 camera. Moreover, their other sensors are a 12MP ultra-wide-angle camera and an 8MP telephoto camera with 3x optical zoom.

Worth noting that just like its sibling, the S20 FE 5G will not include a 3.5mm headphone jack. On the bottom, we have a USB-C port and a speaker grill. Moving to the top, we have a SIM tray. On the right side of the handset, we have the power button and volume rocker. Under the hood, we will have a Snapdragon 865. However, don’t hold your breath for it since there is an Exynos variant coming as well for the usual markets. The phone also has a 120Hz refresh rate display, IP68 rating, and a 4,500mAh battery with fast-charging support.

It’s important to not hold your breath if you’re waiting for a more affordable Galaxy Phone that is affordable as some flagship killers. Samsung’s “more-affordable” Galaxy S20 FE reads like a phone that will cost nearly $750. Which still is priced below other Galaxy S20 phones. The phone may go official in October.