In September of last year, the Chinese OEM Vivo launched its budget smartphone Vivo Y19. The firm is already working to announce its sequel, which is expected to be branded as the Vivo Y20. The product has now been identified in the Indonesian certification database. The listing reveals that Vivo Y20 will bear the V2027 model number. Apart from verifying the name, the listing does not disclose any further information. 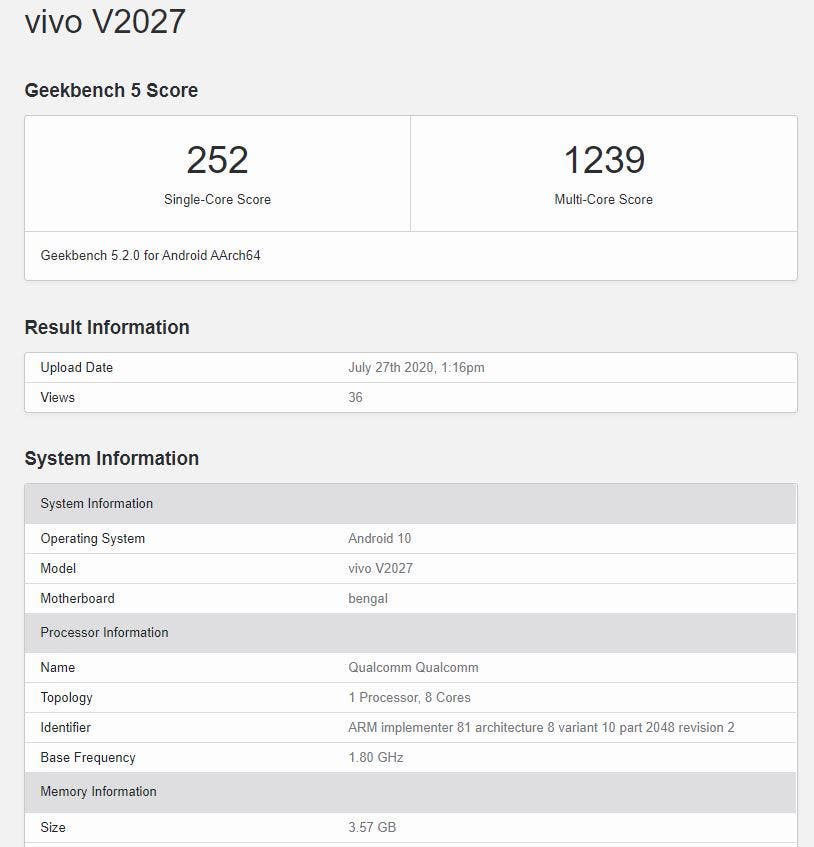 Recently, Vivo Y20’s V2027 variant has also appeared on the Geekbench benchmarking website, disclosing some of the key information. The chart reveals the system operating on Android 10 OS and a 1.8 GHz octa-core Qualcomm processor coupled with 4 GB of RAM. Additionally,  there is confirmation on the name of the motherboard code as “Bengal”. The device scores 252 points in the single-core score test and 1,239 points in the multi-core test.

To recall, the Vivo Y19 bears a 6.53″ FHD+ display with a teardrop notch atop housing the 16MP selfie snapper. Moving around to the back, we can easily spot a triple-camera setup. This particular setup comprises of 16MP main, 8MP ultrawide, and 2MP macro units. According to Vivo’s official information, the ultrawide cam allows you to capture pictures with a field of view of 120º. When it comes to the 2MP macro sensor, you’ll be able to capture objects from as close as 4cm.

Vivo’s romance with MediaTek continues with the Vivo Y5s since it sports the Helio P65 chipset. The horsepower is coupled with 6GB of RAM and 128GB of Internal Storage.  Software side, the handset runs Android 9 Pie-based FunTouch OS 9.2 straight out the box. If you’re familiarized with Vivo’s traditional skin, then you know that Game Cube, Multi Turbo, and AI-based digital assistant Jovi are making a comeback. Last but not least, the device draws power from a generous 5,000mAh battery with 18W fast-charging.

The Snapdragon 460 utilizes the 11nm manufacturing process with 8 Kryo 240 cores and a max clock of 1.8GHz. The integrated GPU is an Adreno 610; along with a Hexagon 683. Compared with the Snapdragon 450, the new SoC should bring a 70% higher CPU performance and 60% increase in GPU performance. Meanwhile the built-in Spectra 340 ISP can support a maximum resolution of 25MP and up to three cameras. It integrates a Snapdragon X11 LTE baseband (390Mbps), support for UFS 2.1 flash storage, LPDDR3 / LPDDR4X RAM, QC 3.0 fast charge, etc.