Earlier this year, Oppo introduced the Oppo Find X2 series as the next big for the company’s popular flagship lineup. The company, then, shifted it focus back to the Oppo Reno lineup. This gave birth to the Oppo Reno 4 series in China composed by the Oppo Reno 4 and Reno 4 Pro. The duo of smartphones came with gorgeous displays, powerful cameras, and the 5G-enabled Snapdragon 765G. In the end of the last month, the company decided to make these Global but ditched the chipset in favor of a 4G-only Snapdragon 720G. Now, the Oppo Reno 4 which is already made of four devices is about to get a new entry dubbed Oppo Reno 4 Z 5G. 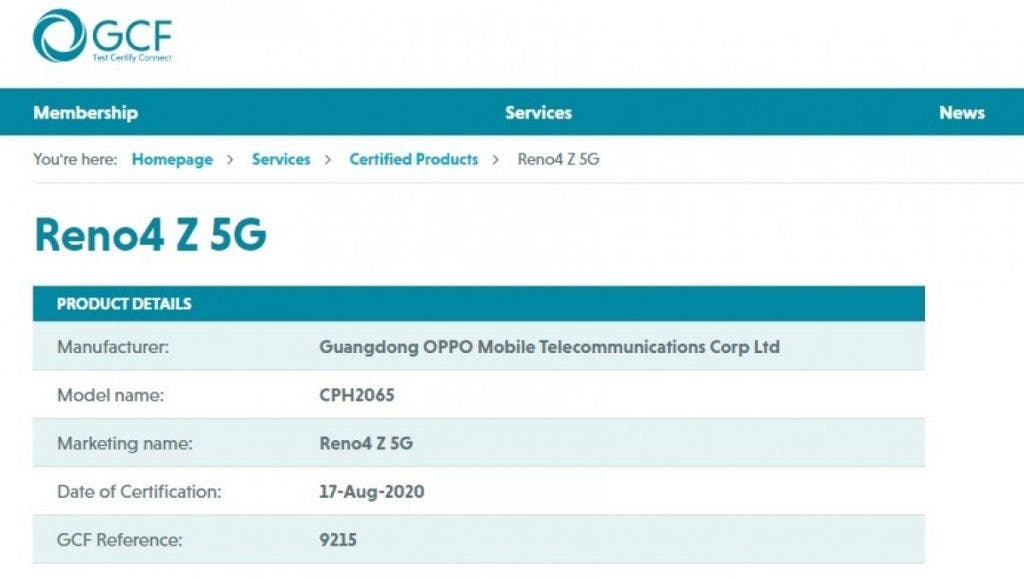 A new Oppo mid-range phone has received certification from the Global Certification Forum under the market name Reno 4 Z 5G. This device spots CPH2065 model number and, apparently, this is the very same device that already got Bluetooth SIG and Federal Communications Commission (FCC) approval. According to the recent leaks, this CPH2065 handset has the very same specifications as the Oppo A92S 5G. Apparently, Oppo is bringing this phone outside of China as Reno 4 Z 5G. That’s not a surprising move as many companies do the same.

Under the hood, we expect the phone to carry the very same Dimensity 800 chipset. It’s a powerful Octa-Core chip that features an integrated 5G modem. The phone may come with up to 6GB of RAM and 128GB of Internal Storage. Moreover, it flaunts a 6.57-inch LCD Display on the front. Moving around to the back, we should have the Quad-Camera setup aligned on a square-ish design.

Worth noting, that despite having a “5G” on its name and shipping with a 5G chipset, the GCF doesn’t mention the potential bands. The authority only lists 2G GSM, 3G UMTS, and 4G LTE networks. Despite the phone’s capabilities, the phone cutting-edge network support may not work in some countries. Of course, this is the best strategy. After all, getting a 5G phone right now is more future-proof. If the company can offer a cheap phone with the 5G-enabled chipset, why offering one with just 4G for the same price just because a region doesn’t have a 5G network operating.

The Reno 4 Z 5G will surely be a competitive phone, perhaps more attractive than its 4G sibling. We need to wait for an official word from Oppo regarding the phone’s launch.