Xiaomi has been celebrating its 10th anniversary this week; and has chosen to circulate its own pure gold commemorating coins as an expensive memento for their fans. This is possible with gold when the brand can boast of selling more than a 1000 units, 1,660 to be exact of the 98-inch Redmi Smart TV Max in just under a minute; where the TV is priced at 19,999 yuan (~US$2,877)  for a piece. Here’s a report on the latest Redmi Smart TV Max sales.

At 19,999 yuan (US$2,877) each, that’s a tidy sales figure; of nearly 20 million yuan (US$2.877 million) reached in a minute. Xiaomi has produced great progress with the 98-inch Redmi Smart TV Max every time offered up in a flash sale. On its opening release, 1,000 units of the Redmi Max 98 were sold in just over three minutes; so considering that, the latest sales achievement is even more remarkable at 1,660 units. It seems that Xiaomi has been able to pull off its buyers in China with the attractive price for a 98-inch smart TV; offering MEMC technology, a sturdy metal-frame build, Dolby support, a 12nm custom processor, and 85% NTSC colour gamut coverage.

The reason behind making a 98-inch Smart TV?

For those who are wondering, why is Xiaomi making a 98-inch TV? even though there is not a huge market for it. In the live broadcast last night, Lei Jun r explained his original intention, which was related to the recommendation of NetEase founder Ding Lei. At the Wuzhen Conference in August last year, Lei Jun had a drink with Ding Lei at the dinner. Ding Lei mentioned that their office uses Xiaomi TVs for video conferences; but they would require a larger TV panel or switch to a projector, so there is a demand for a large-screen TV; with a maximum budget of 50,000 Yuan.

Ding Lei also mentioned that, if there were such a Mi TV, he would purchase 100 units of it. After hearing Ding Lei’s proposal, Lei Jun immediately called the general manager of Xiaomi’s TV department; and said that “many companies now use are using TVs instead of projectors. Could we make a super large-screen TV? Can it be less than 50,000 yuan”, then the Xiaomi R&D department quickly followed up. 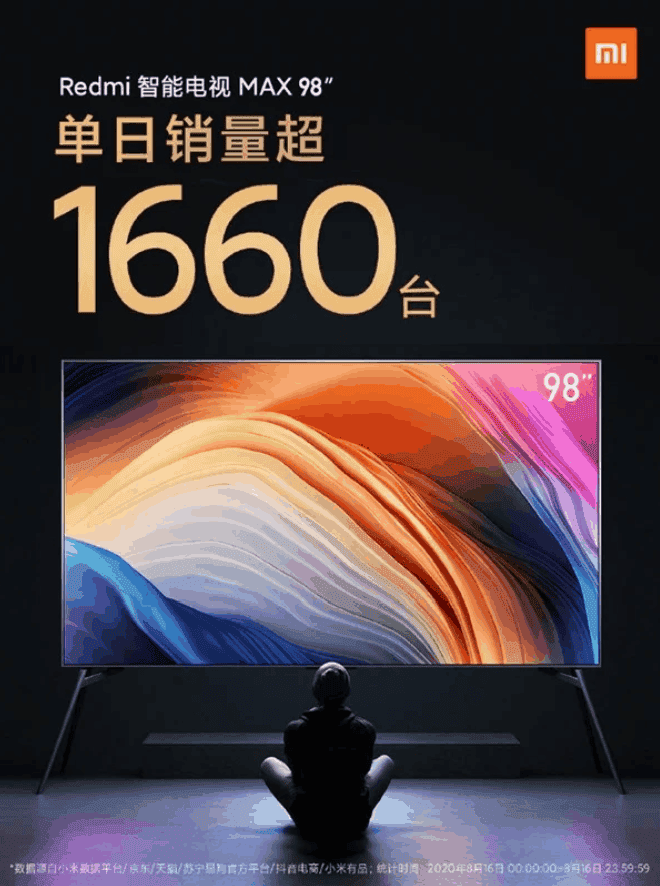 Eventually, in March of this year, Redmi launched the Redmi Smart TV MAX 98-inch TV; with 4K resolution, 13.6% larger than a 1.2-meter single bed, and flattened like a ping-pong table. Furthermore, the price of Redmi Smart TV MAX 98-inch TV is just 19,999 yuan which is obviously less than the 50,000 yuan price tag, but also only 1/5th the price of other similar products from competing brands. It also comes with an exclusive delivery service, and the whole process from delivery to installation is completed within 30 days

It still remains to be seen if Xiaomi will offer the Redmi Smart TV Max in global markets, where it would likely repeat its domestic sales success.